Announcements will continue until morale improves! 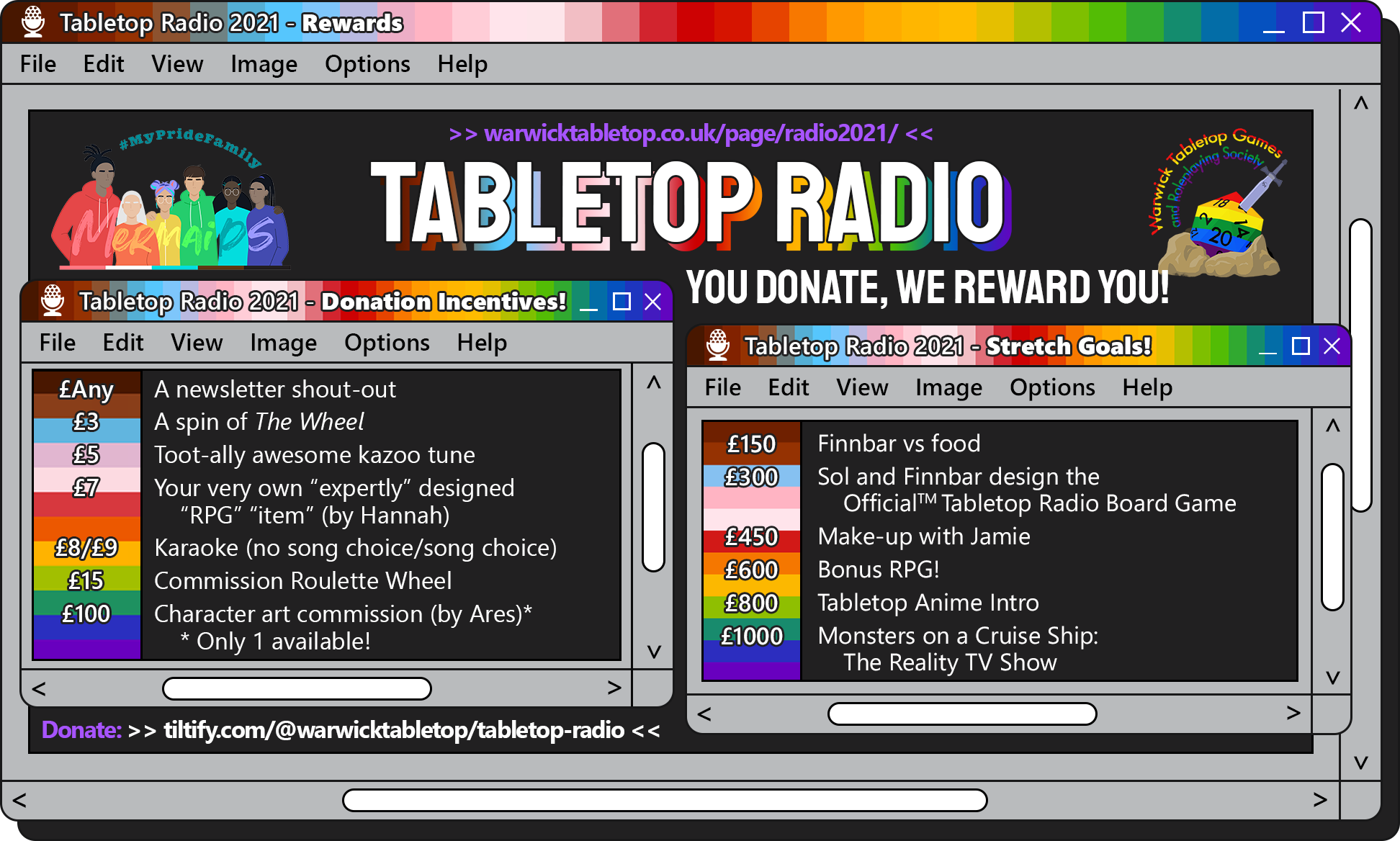 We have a bunch of new stretch goals revealed! (and one slightly tweaked for logistical reasons - the RPG stretch goal is now Adventuring with Pride because Alex Dixon couldn't make it on the day). A Tabletop Anime Opening, which will be... an experience, and if we somehow make £1000, a sequel to Monsters on a Cruise Ship in the form of a short campaign (if you haven't yet, go watch the VOD of that from last year, it's so good). Plus, you now have even more incentives to donate, like magic items from yours truly, karaoke in the next interlude, art from a random artist or "artist", and an actual full body character commission from Ares!!!! 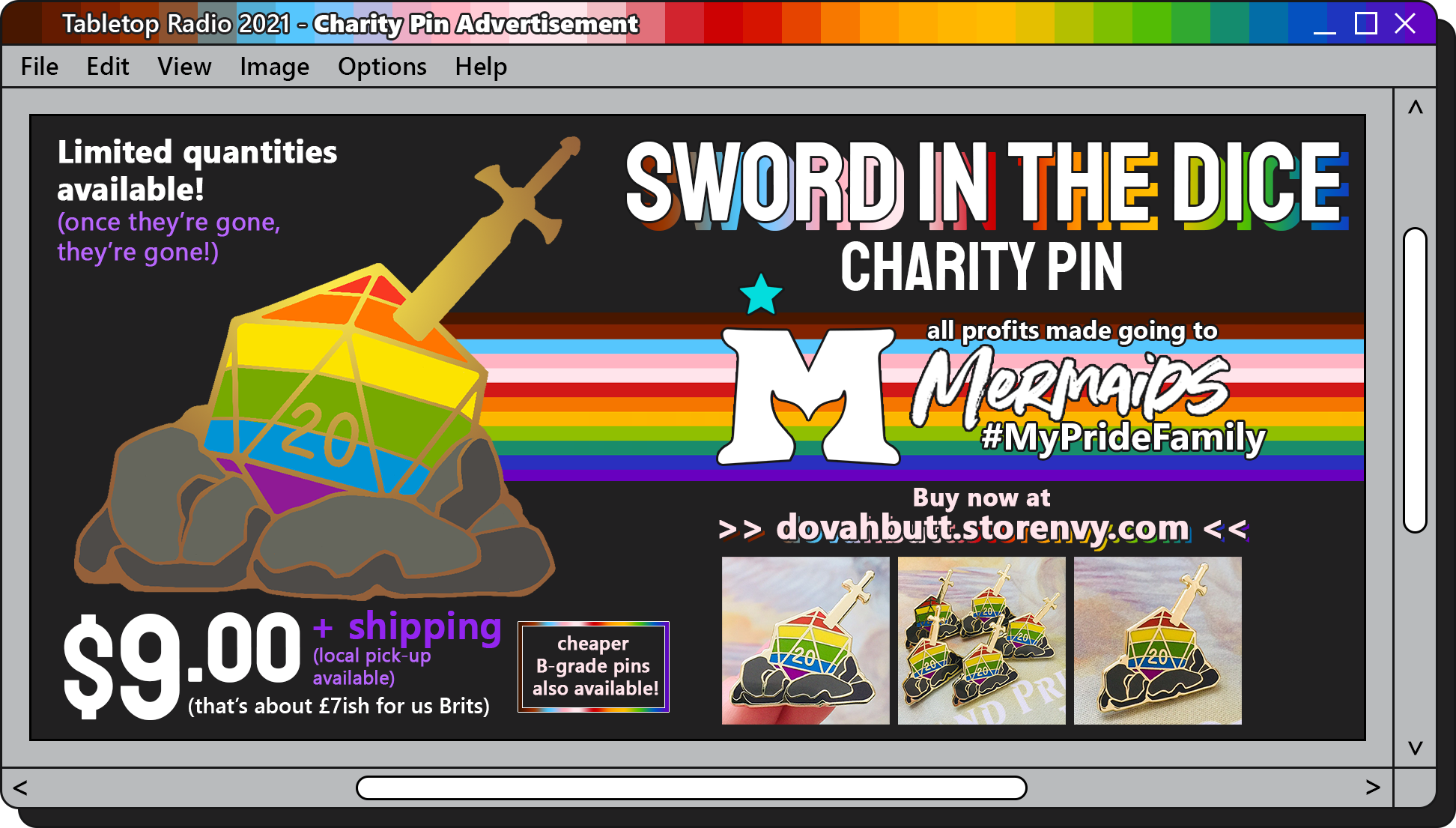 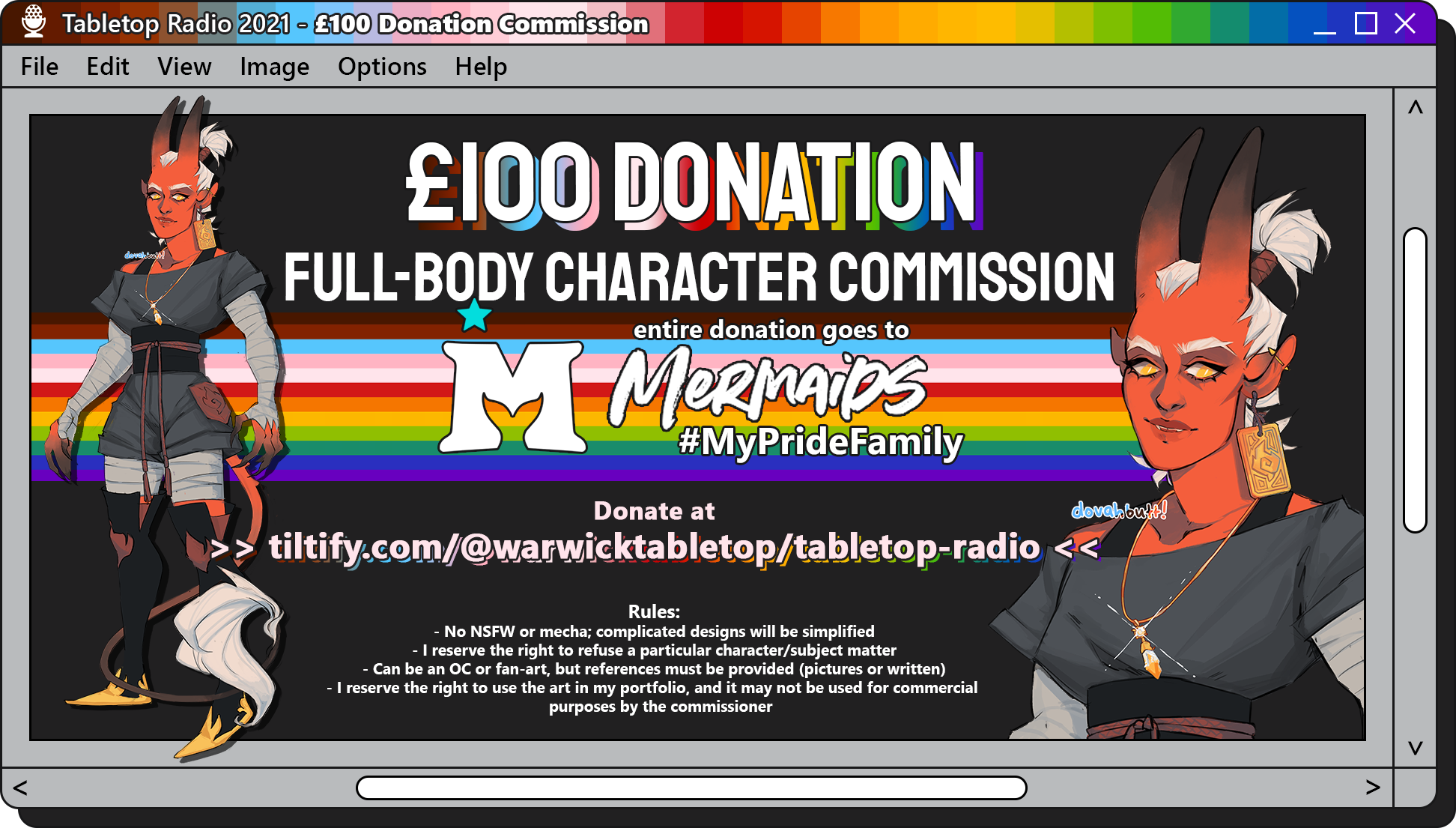 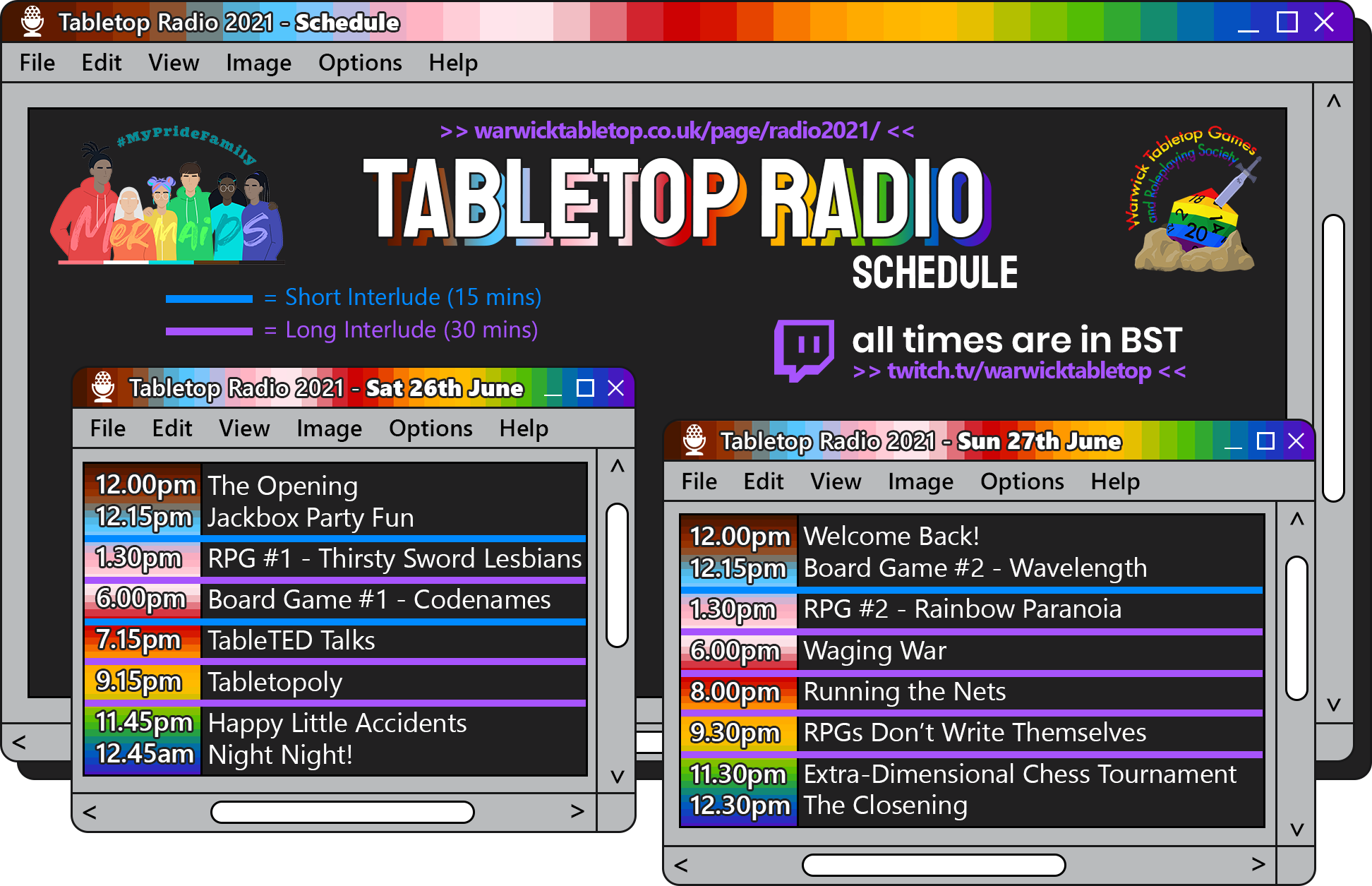 Here's the schedule, after all the tampering with the fabric of the universe that has happened, like posting an image in the newsletter with Codenames and Wavelength swapped then going "eh it's easier to swap them and commit to the newsletter one than to try and fix this." We have some segments that are completely full (Tabletopoly + Jackbox), some that could take more players (Codenames and Wavelength), and an RPGs that actively need more players (Rainbow Paranoia - more details, including links, later in the newsletter). Eagle eyed readers may also note that neither of those RPGs in the schedule are Adventuring with Pride, Alex Dixon had commitments come up so can't run it on the day, so we've moved it to the £600 stretch goal instead.

Ah, another exquisite day in Alpha Complex! Each of our beautiful citizens, all working together in harmony and order to serve the whims of the almighty computer, all beholden to the perfect and infallible clearance system. By designating colours to our citizens and allowing them to put their hard earned XP points into upgrading that colour, not only do we maintain the rigid social hierarchy needed for an ordered society, we also ensure fairness by allowing any troubleshooter who wants power to be able to work hard and earn it. You might have heard rumors of an outside force looking to upheave the clearance system, backed by financial donations from sources unknown and with no motivation other than to cause absolute chaos, but I can assure you that any such rumors are totally unfounded. So remember to have fun (for fun is mandatory), and always be praising the computer!

Rainbow Paranoia signups are still open! All you need is a working mic, an internet connection, webcams if you want to show your face, and an undying loyalty to friend computer! If you have any queries or concerns, DM Jamie (@ORCH1D#3686) on discord.

Hey everyone, in the upcoming tabletop radio we are running a tabletop themed Monopoly game called Tabletopoly which we are going to try and endure for two hours. Just wanted to let you know about this form where you can provide ideas for donation cards which will be used in addition to the regular chance and community chest cards. These will be used when people donate at least £1 and are designed with wacky effects in mind which can apply to the active player, the whole table or anything inbetween. Preferably references to things relating to Tabletop society would be great, but go wild, I'd love to hear ideas for different effects and funny flavour text. E.g. a boreworm is engaging your location! All players lose x money to put towards defenses.

Submit your ideas here! (Thanks Alex for writing an announce so I don't have to) 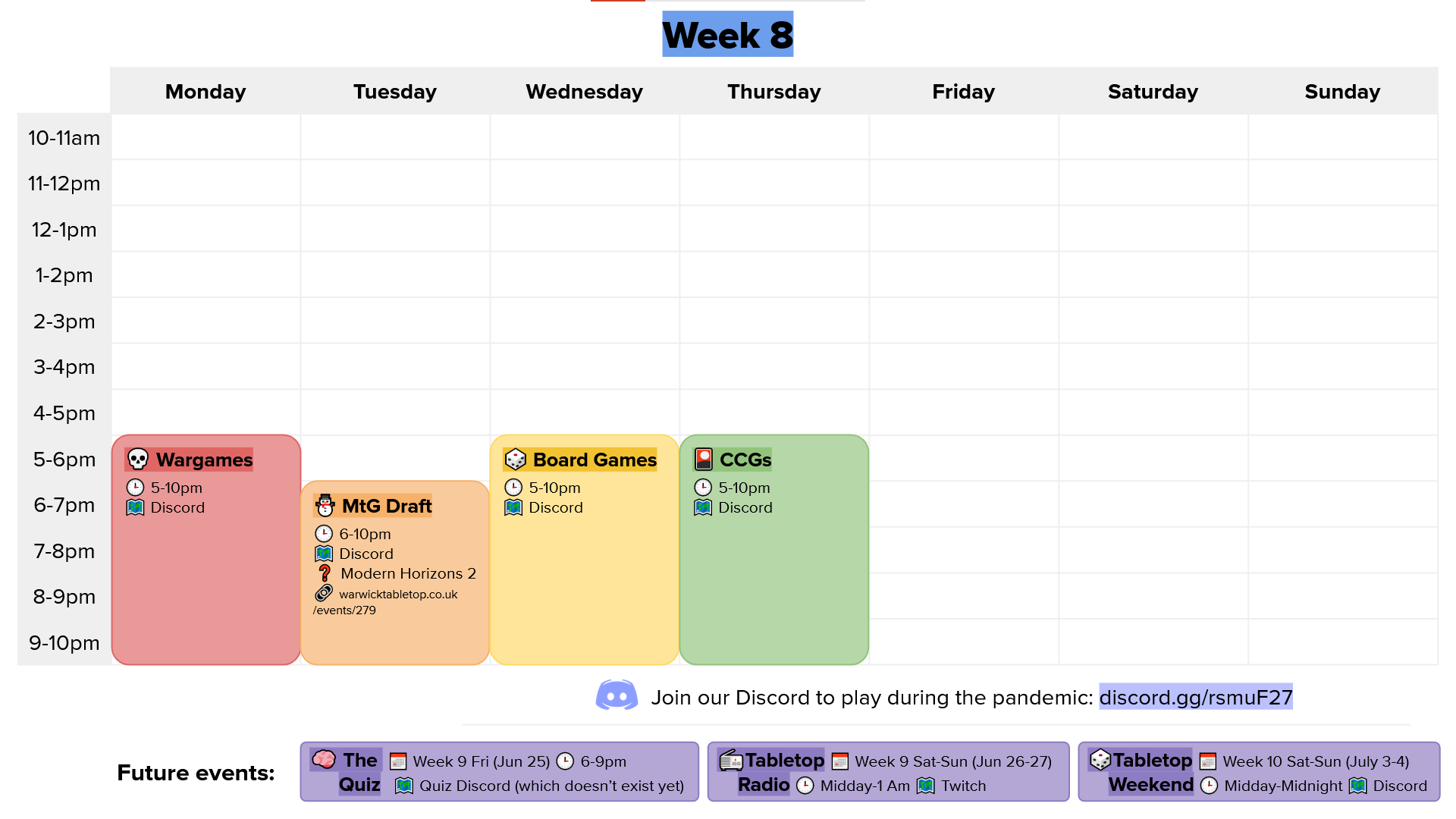 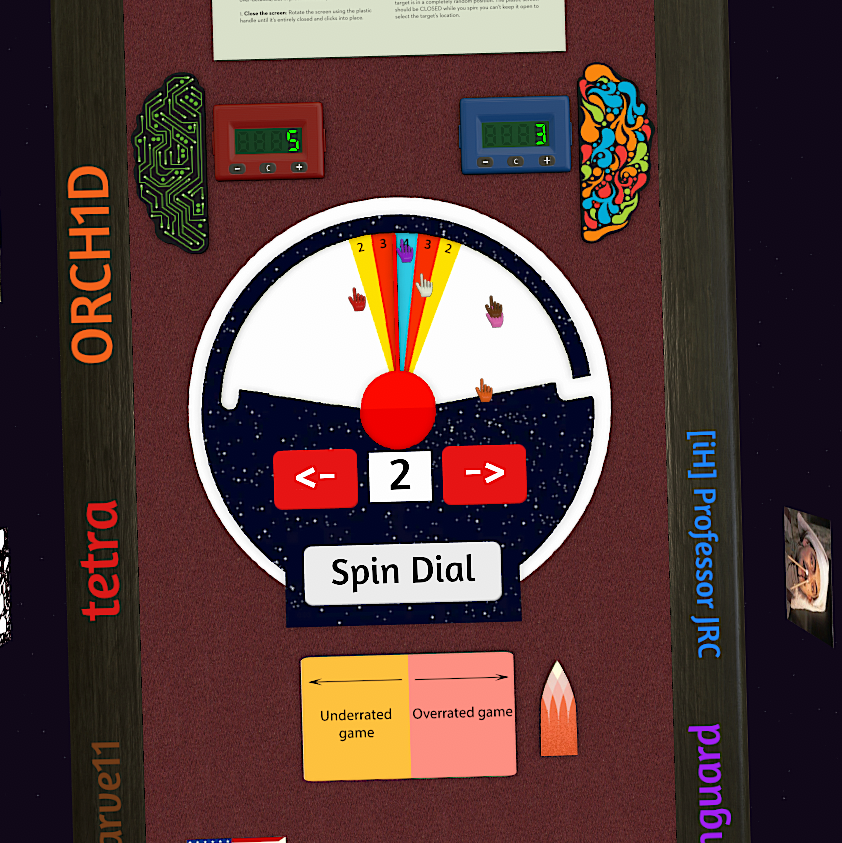 After years of research into the field of Mario Kartography by some of our Society-Certified Nintendologists (one of whom has gone on to publish some groundbreaking work in the field of Mario Bros Kissability), they have managed to agree through the medium of wavelength that Mario Kart is the most ideally rated game - it has been perfectly assessed by critics and players alike. I do not have their combined millenia of research experience, but that judgement feels right on a gut level. 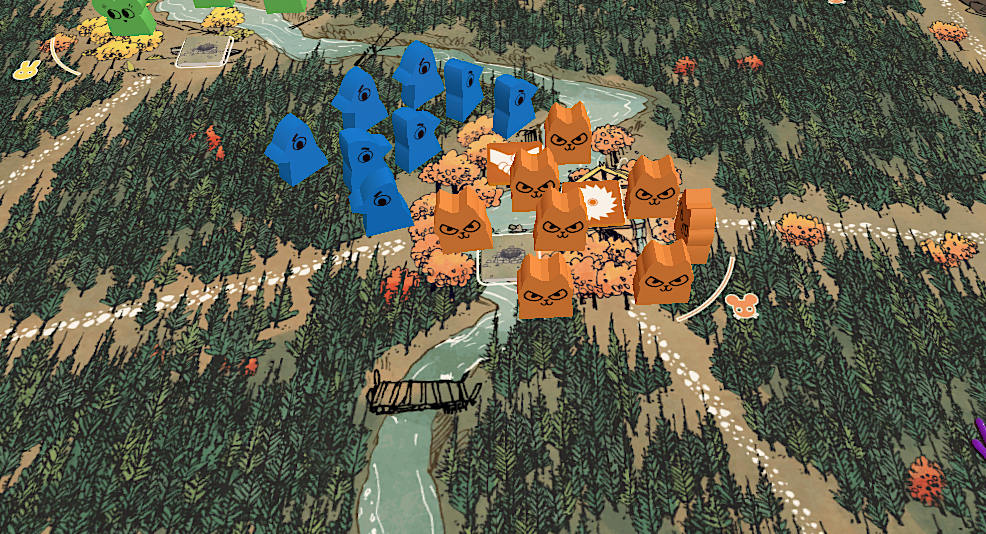 As a completely unqualified scholar of Root, and working solely from the one line description I was given ("The Full Scale War of the Wood between Isaac and Spy") and this screenshot, I will now attempt to tell a full history of the wood.

Year 0: The wood springs into existence. (The calendar starts about two weeks late because it took everyone a bit to work out what was going on)

Year 3: The cats find a buzzsaw in the wood, seizing it from its original mouse owners (as seen by that tiny mouse next to them in the screenshot)

Year 4: The birds, egged on by the leadership of their magpie dictator, begin raising an armed force to seize the shiny thing.

Year 5: The cats engage in forbidden rituals of sacrifice at the buzzsaw, and grow a pile of horrifying, humanoid, limbs. The birds seek aid from the mice and other denizens of the wood, but are denied it because flight is inherently untrustworthy.

Year 6: The beginning of the great War of the Wood, between the Imperial Legions of Birdkind and the Feline Communion of the Unbound Limbs.

Year 32: The Cats are finally defeated, crushed under the aerial superiority of the Bird Empire, which has itself been brutally weakened by the war. What is left of the wood is still theirs to claim, however, as the few survivors are neither willing nor able to contest their hold over the scorched bark and fallen trees that were once a tranquil woodland.

Magic? in my items? it's more likely than you think!

Skates of Thin Ice: (With credit to Lewis+his friends) Shoes that allow the wearer to glide on the surface of liquids, but whenever they do anything that could be construed as annoying another entity (up to and including attacks), the enchantment fails and the wearer is dunked in the liquid.

Blade of Endless Ambition: A weapon of legend, its power only outmatched by its ego. A sword stronger than any rival forged by mortals or divinities alike, it is nevertheless filled with infinite hubris, and will convince you to go after ever greater and more ridiculous targets. These will start with the scariest threat in your vicinity, before moving up to "mere" dragons, and working eventually towards more impossible victims such as a Tarrasque, the gods themselves, or the Sun. The sword itself has no regard for your wellbeing, taunting and driving you onwards even as you try to find a healer to deal with your leg that a hellhound used as a chew toy. If you try and resist its commands, it will go into a sulk and act as a completely inert lump of metal until you fight something "interesting".