Exec meeting minutes for our meeting in week 2. Fun fact! I definitely remembered that I volunteered to do the bonus quiz round before checking this! All my ideas are flooding back, which is a sign that I should probably write them down. 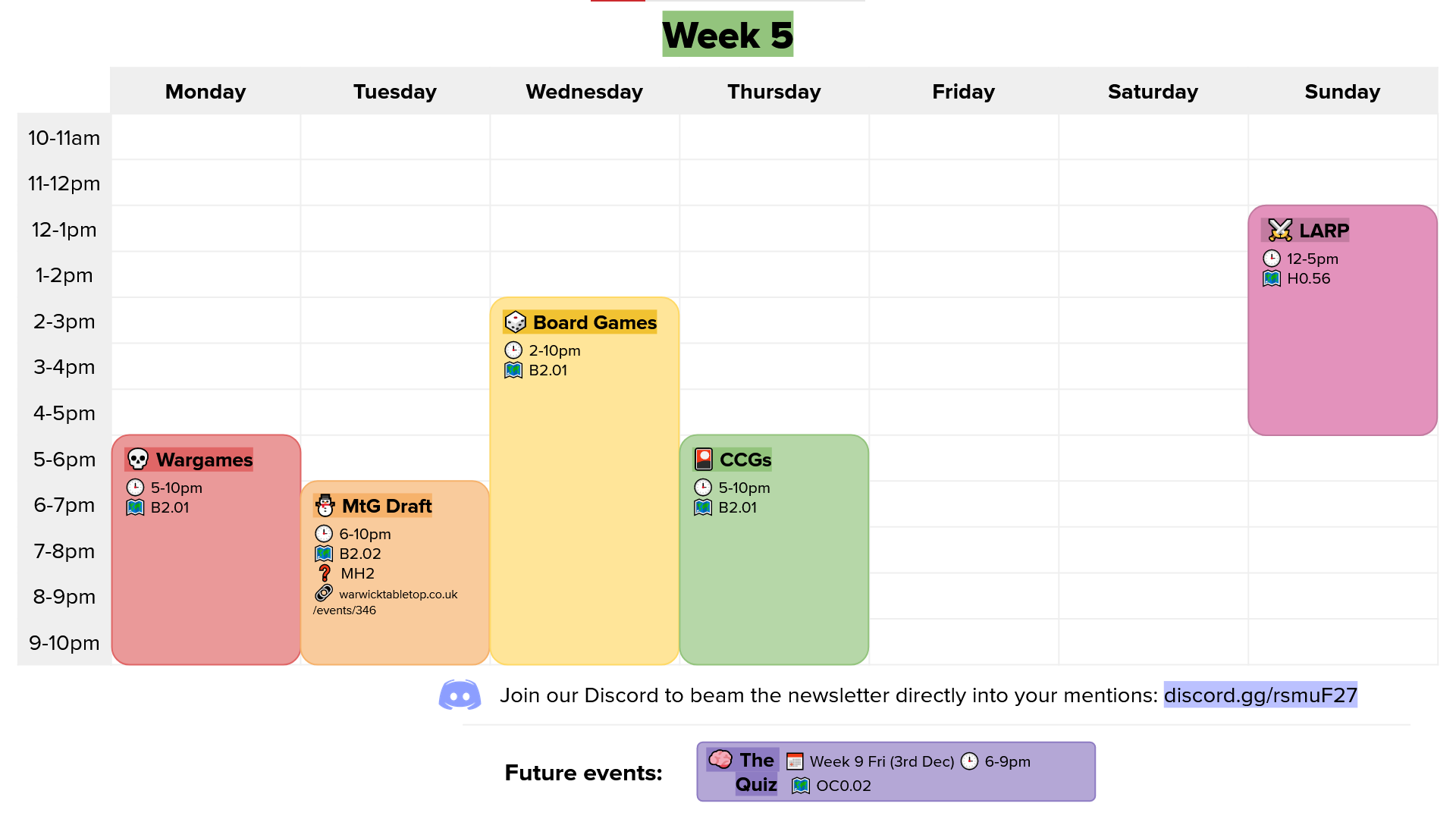 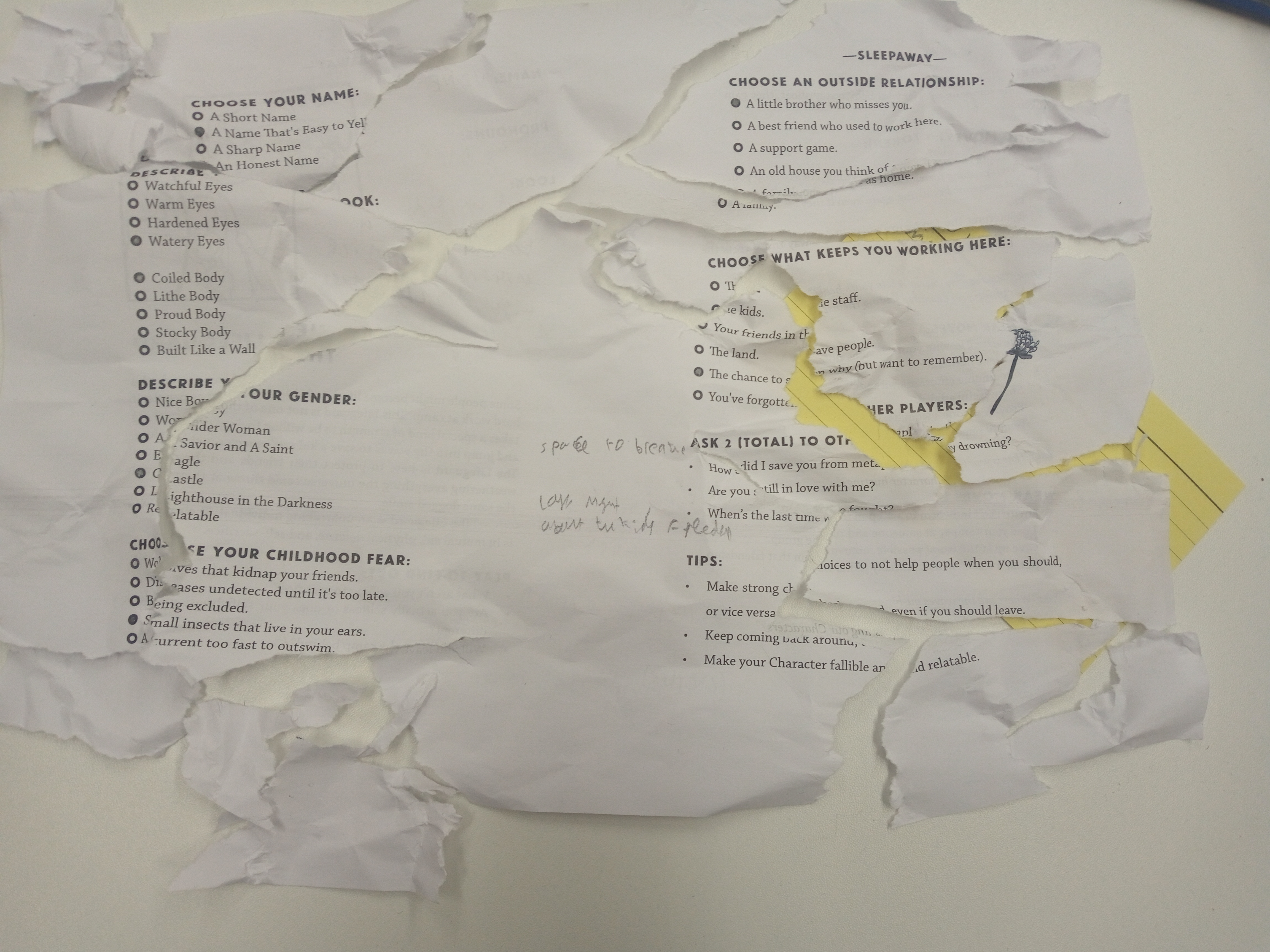 After over a year of meaning to, I finally got to run Sleepaway for Hallowe'ek! I tore my character sheet apart with my mouth as they bled to death surrounded by friends who returned too late to save them! Bird almost suffered from nominative determinism by becoming a bird! Magic did not look kindly upon the dishonest! For real though, it was an absolutely exceptional experience, and now I get to misuse my platform to thank everyone so much for being a part of it.

A Halloween netrunner tournament happened, complete with custom rules and an actual tiny pumpkin (ok technically it was an "Autumnal Squash") as a prize! Artock stole the most pumpkins, and so got to take the legally distinct pumpkin home, though I have no clue what he did with it given it'd be kind of short notice for carving it for Halloween. Meanwhile, Scarlett won the actual "winning games of netrunner" part and so got our extremely prestigious trophy (complete with newly acquired sticker.)

After two years and three weeks, 13 level ups, and a Paladin dishing out a triple digit damage roll, Lawful Tim's D&D campaign has come to a close. Speaking as someone who's never managed to organise a campaign for more than a month or two, this is a an impossibly impressive labour of love. I have also been given a very loose collection of highlights from Benji, including: "[we] got a bunch of cash which was immediately invested into a magic school and a keep because Capitalism", "we keep getting kidnapped, bullied, and hunted by people far more powerful than ourselves" and "more armies than I can count" (concerning, for an ex-treasurer).

You remember that EGM, the tension in the air, nobody willing to broach the topic of the missing exec, the empty spaces, the fact that wargames was left unrepped. You remember, too, the manifesto you found. The words were not your own, but the name on it was. The hours and days after you stood (driven more by panic than hope), the tradings of weapons and lighthearted jokes failing to break through the fear at the hustings, the sense of finality as you awoke in that locked room. You remember cheers while drawing your blade in shaking hands from the corpse of R.O.N. as Anakin proclaimed you the Co-op officer, and you felt the radiant hunger of newsletters past flow through you.

In the present, your mouth opens, and the words that flow forth sing of silence and survival, wreathing you in shadows. There will be a price later, of course. Even in death, language resists. For now, though, there is thick fog, the clank of colliding keys, and a safe path through the rubble. This safety cannot, must not, last forever, but it gets you far enough away to hide, and then move onwards.

The sky is strangely bright, and the air in the piazza almost safe to breathe. The wreckage of the SU is notionally patrolled by an eclectic mix of Campus Safety, the Welcome Week team, and a handful of porters, but each are convinced it's the other's responsibility and so the ruin is unguarded. Clambering through the bricks, you see a glint of light strangely distorted. The dice sit before you, indescribable and alien. Impossible skies are visible in their many faces, each the echoes of a distant world. You reach for them, but as you turn to leave a wave of anger and sound lashes out through the shards of glass and brick. It demands appeasement, sacrifice, fuel for the wards that contain it. From your overexposure to the forbidden lore of tabletop, you know different dice have different powers, and some may have... unexpected results.

Which dice, if any, do you leave behind? (As last week, if you want to answer, just DM me on discord (@aceempress#9631), and allow democracy to lead us onwards)