Week 9 Newsletter - The Week of Many Things

Ha, it's called the Week of Many Things because it's like the Deck of Many Things except this deck only has four cards and they're all events. Netrunner has event cards, so does this make it a Netrunner deck? But isn't the Deck of Many Things from D&D which is notably not Netrunner? Maybe this is the start of a beautiful crossover game where you get to hack into servers but you're a magician pulling out hacking tricks from a deck of cards. And some of those tricks will give you untold riches while others will take your soul from your body, but if you forget a line of code it won't compile and you won't hack in successfully.

...or maybe I'm just stretching this joke a bit thin. Let's get on with the news!

After many weeks of advertising it, it's finally here! Much gaming, much takeaway, much fun. The only thing people may be not getting much of is sleep. Or work done. [Editor's Note: This is too real, stop.]
Also, people still seem to be hungry for Diplomacy to the point where a group including our Board Games Rep Patrick are planning to play it during the weekend - signups for that can be found here. But don't worry if that's not your thing, as there will be many other games played too. Will Two Rooms and a Boom happen at 2am? How many games of Dinosaur Island will be played? There's only one way to find out. Facebook event here!

If you were at boardgames last week you'll have hopefully seen the beautiful dragon trophies perched on the wall and thought "hmm, I'd love to win one of those". Conveniently, this Friday is your chance! All you have to do is answer a bunch of mean questions set by the exec. Easy, right? Also our former Communications Officer John is doing a bonus round and you're in for a treat, if you like being confused by completely ridiculous questions that nobody will ever get right (don't worry though, there are sensible rounds as well). We'll be going to Varsity afterwards too for a post-quiz social. There's even a Facebook event which you can find here.

We're hosting a joint CCGs tournament with Coventry University's gaming society on home turf in the Humanities Building. So if you play Yu-Gi-Oh or Modern, this is the place to show off your skills! Note that unlike in our regular Casual Card Games sessions proxy and counterfeit cards are not allowed. Also note this is really two simultaneous tournaments, you don't spend half the time playing Modern and the other half playing Yu-Gi-Oh, or even play both simultaneously. Hey, this could be the start of a beautiful crossover game where you tap lands to synchro summon from your sideboard and... [Editor's Note: Stop.]

The Computing Society are doing a talk on 3D printing and the services they provide (aka a 3D printer) for you to do that! This event is open to all (including non-members of CompSoc) so if you've wondered how you can print some cool figures for your next RPG session or some replacement board game pieces, this is likely the talk for you. Also there's free pizza which makes me very sad that I can't go. Details on Facebook here.

The rooms are still the same! That explains my odd feeling of déjà vu.

As always, if you're looking for RPG one-shots or campaigns, please check out our Events page. Tim's one-shot sign ups are now up here as well as sign-ups for Alex's homebrew slightly festive one-shot running on Wednesday here.

Unfortunately this newsletter isn't becoming dog news as there wasn't a cute dog at boardgames last week, but hey maybe there'll be one this week. My personal highlight of the week thought was the game Identik which our RPG Rep Callum found in a charity shop for £3. The elevator pitch of Identik is that one player has to describe a piece of art in ninety seconds and everyone else has to draw it. Its slogan is "A drawing game for people that don't know how to draw" but I don't know what they're talking about, the art drawn on Wednesday was wonderful - you can see some of it below! None of the artists wanted to be attributed to their work because they thought they'd make people too jealous.

Anyway, I hope that everyone's terms are going well! We're approaching the end of term surprisingly quickly and while this is the point where everything can get very stressful, but hopefully our usual events can be a nice break from all of that. 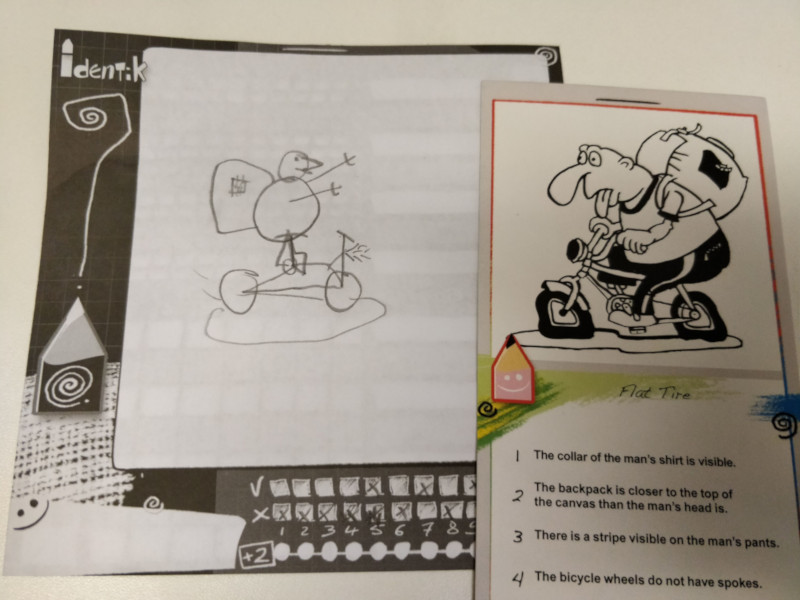 This is a more abstract piece commenting on the weight we carry in society. 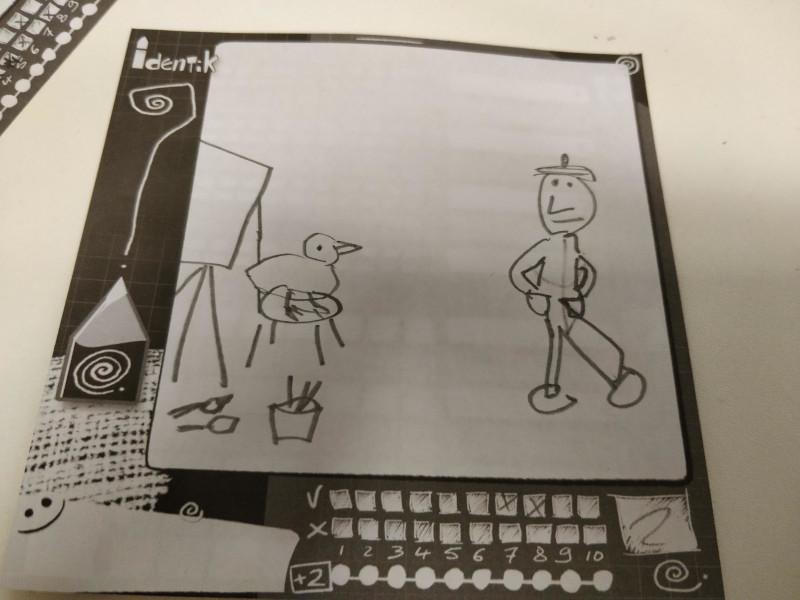 This piece shows a sassy artist who is particularly done with the bird that he's trying to draw. 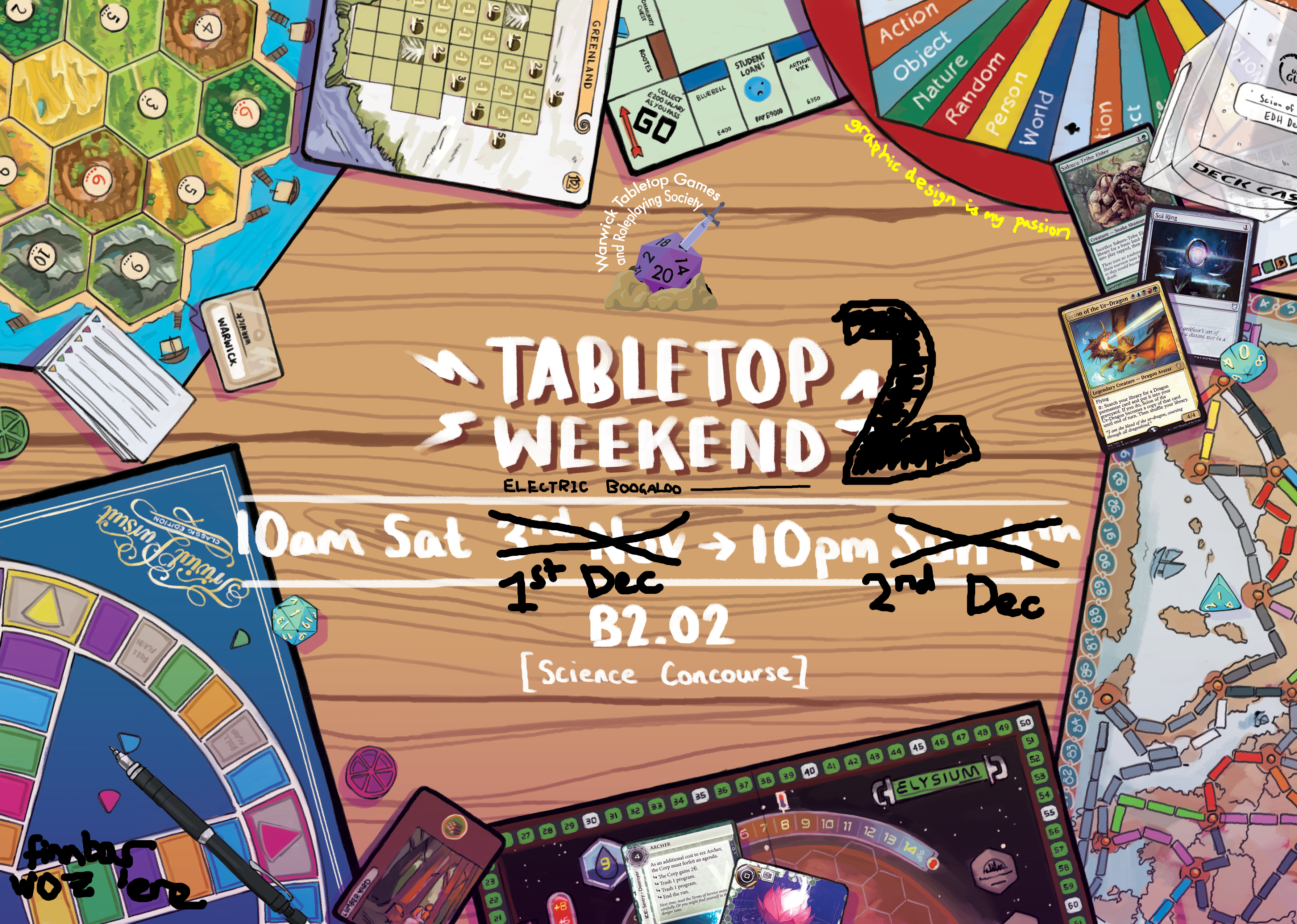 Ares didn't have access to their tablet so I had to step in to make this poster...