End Of Term 1 Newsletter - But Now, The News Where You Are

[You spot a crowd around a nearby TV, and head over there to go watch. A short animation plays on the screen - images of dice slide across the screen with a twenty-sided one dropping into some rocky ground and being pierced by a sword, forming the society logo. "Tabletopopolis News" appears around said logo, and then all fades to reveal a news studio. A figure sits at the news desk, tapping their fingers on the desk in an extremely bored fashion. As the camera pans to face them, they jolt into position as if they've only just realised they're on air.]

Finnbar: Uh... hello, and welcome to Tabletopopolis News, it's Monday! Ughhhhhhhhh. Our top stories this week!

What's happening during the holiday?

Finnbar: Despite the end of term and the apocalypse at the weekend, the society still seems to be going strong, with three events being run (mostly) weekly during the holidays.

Also, the hoodie order is still open until January 14th, so head over to the SU store to grab one while you've still got a chance!

Otherwise, there aren't any special events over the holidays, so you'll just have to make your own I guess. I've heard there's this thing called Christmas where you like see your family and stuff and give presents to people? Sounds good, but also like capitali-

Finnbar: Actually we're going to have to pause being confused because we've got some breaking news about a special event - a new fighter has appeared! 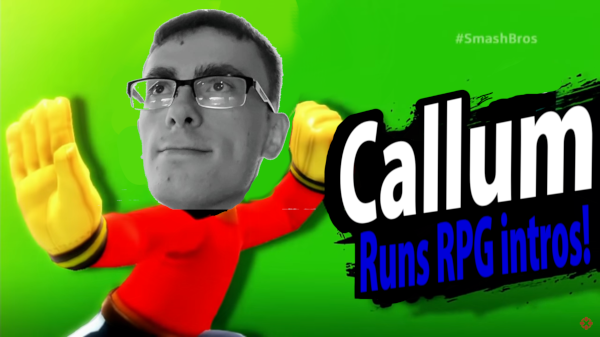 That's right, keep your calendars open for the Saturday of week one, because it'll be fun RPG intro times! Whether you'd like to try D&D for the first time or you're already big on RPGs and just wanna play another one-shot, there'll be something running for you to try. In other RPG news, we now own some extra RPG resources which you can borrow - check Callum's Facebook post for all the details.

Finnbar: And now we have a special report from our Apocalypse correspondent, Nigel.

Nigel: Thanks, Finnbar. A slightly smaller 40k apocalypse than usual, colloquially known as a ‘mishap’ among those in the know, the spectacle was nonetheless magnificent, with hundreds of fully painted models making up the lines of both sides. In one corner, the Grey Knights and Imperial Guard and on the other, the Ultramarines, the Necrons and more Ultramarines. Commander Shelton was the first to mourn, for his mighty Falchion super-heavy-tank, destroyed before it could fire a shot after team Grey Guard seized the initiative. Though the Ultracronmarines stayed in the game for a while, with one brave scout surviving a platoon-sized firing squad for three turns on one of the objectives, the death of Roboute Guilliman to a snap-shooting Vanquisher cannon and that of Marneus Calgar to the squeezing Thunderstrike gauntlet of an imperial knight led brought the game to its conclusion. Victory goes to the Greyguard with a final score of 15-13! Nigel Heathcote, Tabletopopolis News, WCE.09a.

Finnbar: Thanks, Nigel. Seems like a successful apocalypse was had by all! Otherwise, the events this week were relatively normal, with many games played despite the marathon of games a week ago. Questionable things were said during Deception and Concept (have a look at the quotes on Discord (which has the code pCSfTsR if you're not already on there) if you're... interested), and one of the Monikers expansions was opened which included the full title of Idi Amin which it turns out is impossible to recite from memory. Briefly before we end, we go to the weather:

[We pan to the weather reporter, staring directly at the camera.]

[They continue to stare.]

Finnbar: ...aaaaanyway, I hope you all have a wonderful holiday and look forward to seeing you on the other side, with hopefully various bits of exciting start-of-term news. But now, the news where you are. Goodbye for now! 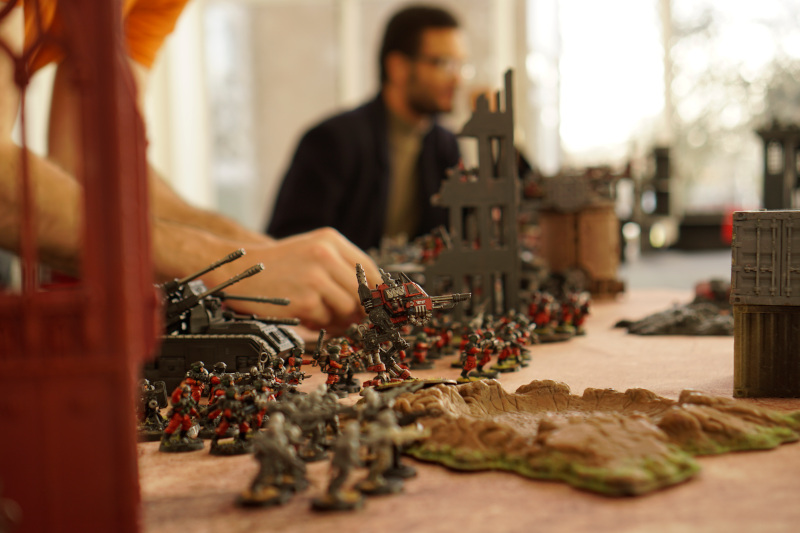 A ridiculous amount of tiny minis waiting to do battle. 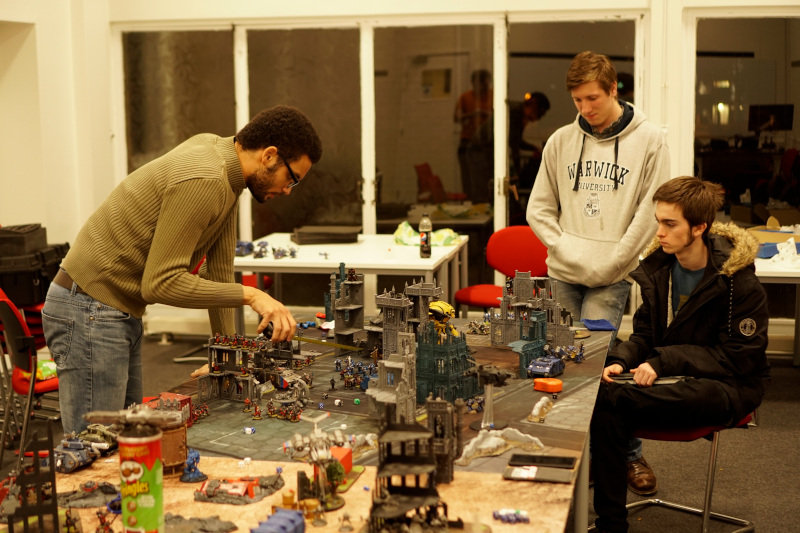 Mid-battle planning, including the most formidable tower of all - a Pringles can.