Captain Panic: Captain's Log, day 42069. Space is cold and empty, not a game in sight. The rest of the crew are in cryostasis, so I must stand alone with only the void as company. We will hopefully reach Alpha Centauri soon, but for now, I'll just look at cute cat pictures on the internet. There was one today with a really bushy tai-

[A huge crash is heard from a nearby window.]

It's been a week since this was last mentioned, which means it's a week closer to Tabletop Weekend! Wow, how time flies. Anyway, it's still the thirty six hours of gaming you know and love in B2.02, so come on down and drop in for as long or as little as you'd like. There'll be all kinds of games and it'll just be a nice atmosphere to relax in partway through term! Also 1am Two Rooms and a Boom is not to be missed unless you're me and can't function without lots of sleep (yes, I'm weak).

Because the AGM is so important (please turn up), I've decided to start a new section of the newsletter called Fun Facts About The AGM! Each week up until the AGM I'll provide a fun fact about this society's history and the AGM. My first fun fact to impart to you is that there is now a Facebook event for the AGM as well as a useful thread of FAQs written by our excellent secretary Ares and a thread for nominating yourself to be exec and suggest motions. Anyway, tune in next week for more Fun Facts About The AGM! [outro music plays]

The rooms are still the same... it's a miracle! There will be more excitement next week though with one whole room change, wow.

Magic: The Gathering Draft is much cheaper than last week by virtue of being free, as we've not got the new set yet so people will likely be cube drafting. Keep an eye out on the CCGs Facebook Group for more info!
In RPGs land, the Events Page is home to a few new events - a Lord of the Rings Campaign and a special one-shot featuring an RPG system that uses voting in place of dice rolls for checks! And I expect Tim's weekly one-shot will be up there soon enough. You're actually spoiled for choice this week, madness.

It's got to that part of term where not many special events have really been happening, so I don't have much to share with you. Fortunately boardgames always has some quotable happenings so let's get right to it. Food Chain Magnate was played to its completion for the first time, with the group of fast food restaurants with possibly questionable morals fostering a corner of beer-lovers in a quiet city to make a massive profit.

A new way to spend the last hour of so of boardgames was also found - learning the rules of games! No wait come back, I'm serious - a small group of us had a pleasant time learning the rules to Last Will, an extremely silly game about spending all of your money so that your dead uncle gives you more money. Now that we've learned the rules, we can try it out for real next week without having to work it out again! Would recommend. Also some people played Bananagrams and Cara earned honorary second place for the pictured grid. It's... impressive.

Also the society archeologists have dug up some more evidence of the legend of the Timforce which is now extended with the three tenets of student life: being tired, hungry and poor. Lawful Tim, who you may know as Tim Hutchinson, turns out to also be Hungry Tim (I can attest to this, I live with him); Chaotic Tim, or Timothy Smith, is Tired Tim; and finally, we have found a reason for not being able to find Neutral Tim - he is Poor Tim, so cannot afford society membership, and doesn't realise that you don't need society membership to turn up to our events! But supporting us is great and you still get a lovely society-branded die (and the ability to vote in the upcoming AGM). 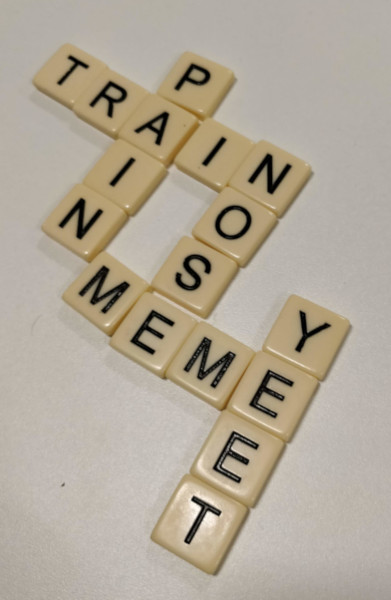 This Bananagrams board is perhaps cursed