I love democracy! Before we begin, an advert from our partners at Tabletopopolis News: 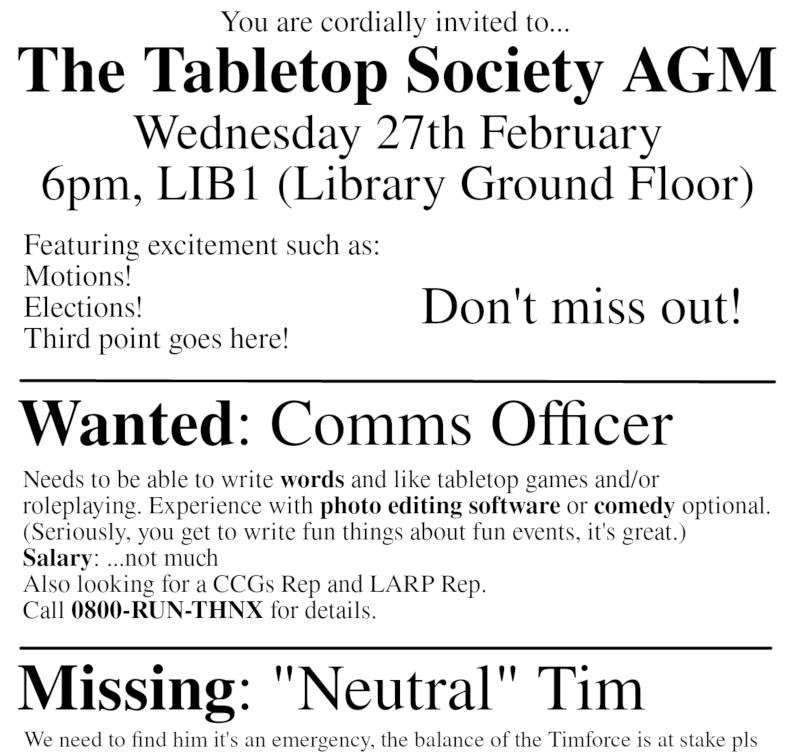 Welcome back to Fun Facts About The AGM, the show about facts being fun and fun being facts. I'm afraid this is our final episode (what with the AGM being this Wednesday and all), but we've got a triple-fact episode ending with our most fun fact yet! You can't say that we don't treat you. Our first fun fact (or I guess stressful fact) is that some of the exec positions still aren't filled, with Comms Officer remaining unfilled along with other positions. I'd really, really recommend running - talk to existing exec members if you're interested in their role! Nominations can be posted here, although you can run on the day.

The second fun fact is that currently you can propose amendments to motions proposed before on this forum thread! You only have until Tuesday 26th February 6pm (that's tomorrow) to do this though, so I'd recommend having a read through of the motions soon.

Finally, it's time for our most fun fact yet, the cream of the crop, the best fact we could pull out of the metaphorical bag of facts. This fact was in fact conceived weeks ago but has been saved for this special edition. So, here goes: AGM stands for "ahh!!! general meeting!" which is also the noise I'll make if not enough people turn up. Please turn up! Seriously, this meeting is so important for the society's future and we also have some incentives - we've just got in the board games Millennium Blades and Rollplayer from our sponsors Zatu Games which will be available to try before the AGM and we also got some leaflets for discounted board games to give out!

That concludes this year's series of Fun Facts About The AGM. Here's your last reminder of the Facebook event, found here. I hope you've had fun learning about the many facets of the AGM and I hope to see you there! [outro music plays for the last time]

Questions, prizes and more as the quiz returns with Ares still at the helm! We'll also have trophies provided by The Pocket Workshop again - keep an eye out for more details about that soon. Also Callum is writing a round and after his beautiful MS Paint drawings and abstract art rounds I expect the third in the trifecta will not be one to miss! Finally in true social media style there's a Facebook event here.

What would the end of term be without Tabletop Weekend? A sad, gameless husk where you'd like have to be productive or something I don't know. Let's not dwell on that, because it'd be awful regardless. Thirty four hours of gaming! The rooms may be a mess (MR2 (SUHQ) from 12pm Saturday - 5pm Saturday, and then B2.02 (Science Concourse) for the rest of it), other things may be a mess, but there'll always be the reassuring warmth of gaming with friends. Oh wait, that might just be the radiator, lemme turn that down... Anyway, Facebook!

Look it's the AGM okay, get the hint. Boardgames will be interrupted by the meeting but is still mostly running, and all the other events are running as normal:

For your RPG needs, please check out the Events Page as always. Tim's weekly one-shot is up here and another one-shot called The Peran Acquisition should be updated soon - I'm informed that it'll be moving time/date as to not clash with the AGM, so keep your eyes peeled for that. Wait, that's a terrible phrase, please don't peel your eyes that would really hurt.

This weekend was the game jam with the Game Design society! We started strong with talks by Dan Ilett (Game Design President) and myself about boardgame design, and then went into the actual game making! Lots of cool games were made on the theme of space, which was mostly interpreted as, well, space, but some people interpreted it as space! Also some people didn't interpret it at all. I've added many pictures of the games made, which included: a dexterity based wargame where all of the spaceships are Jenga towers and you flick dice at them to attack (by me); a space exploration game where you explore for items while trying to avoid the dreaded Final Encounter (by Alex (of Pocket Workshop fame) and Jack Dixon); a super Ludo game where you could buy more dice (by Henry Smith); and a game about giving your children space (by Alex Malte). That's not even all of the games - there were a few incomplete ones and ones that I didn't get photos of! All of these games are coming to a boardgaming session near you! Although maybe not this week, we're a bit busy... The hugest thanks go to everyone that took part and came for playtesting, especially Dan Ilett who without this event wouldn't have been possible.

Also we had an exec meeting about buying a society camera, the upcoming AGM and pantomime society, for which you can find the minutes in their usual place on the forum.

Finally, please come to the AGM. 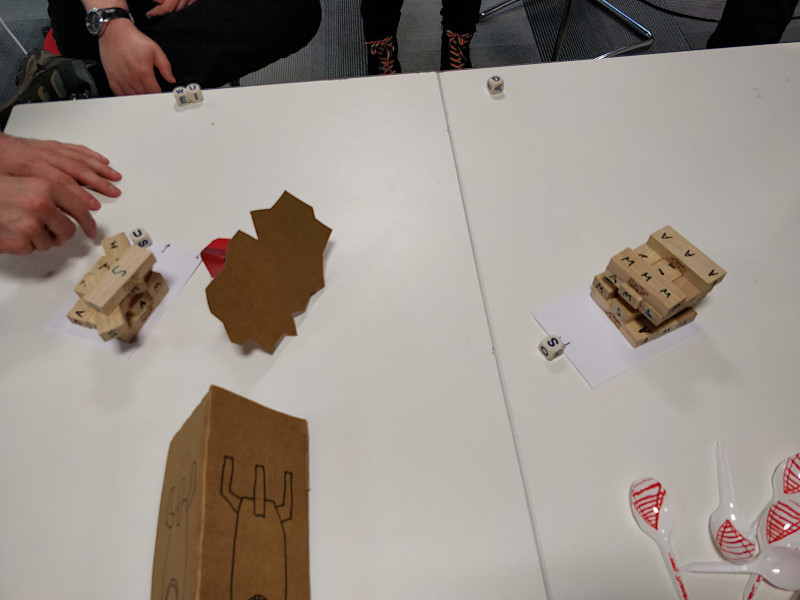 My dexterity based wargame, where the left ship is much more beaten up than the right one... 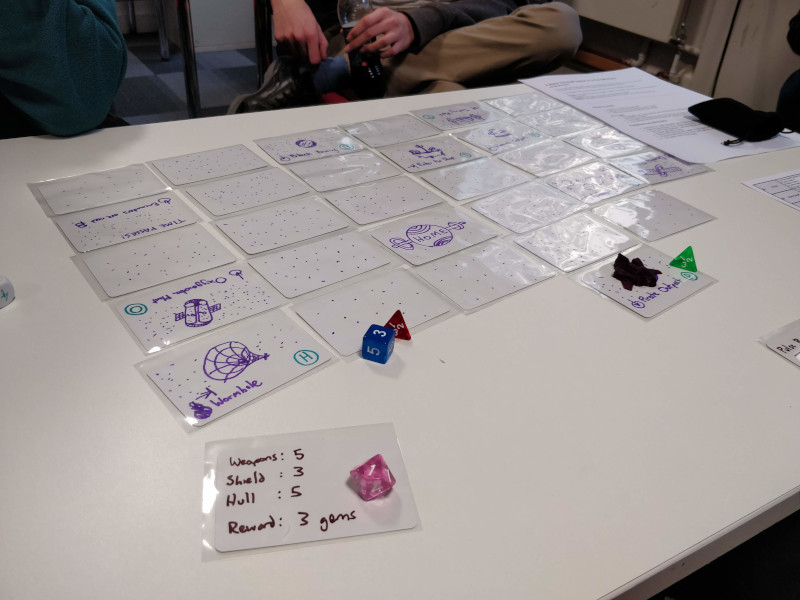 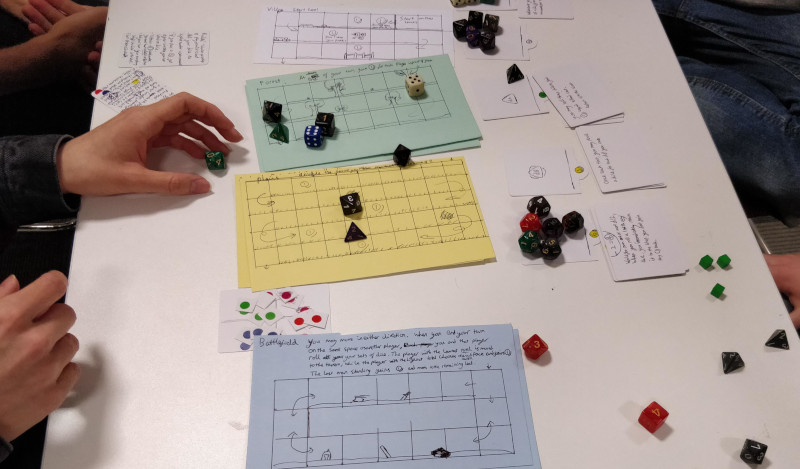 Henry's crazy Ludo-like game, after many dice have been purchased. 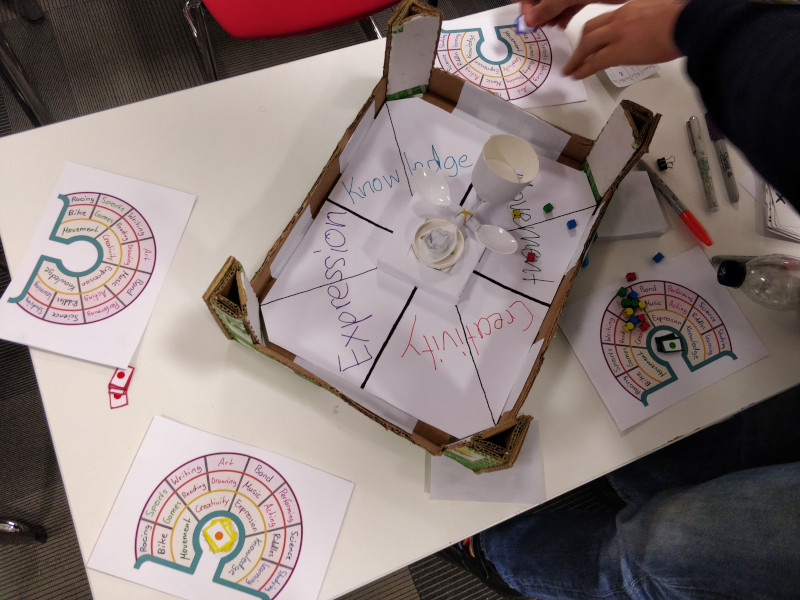 I don't entirely know what Alex's game involved, but it definitely looks mad! 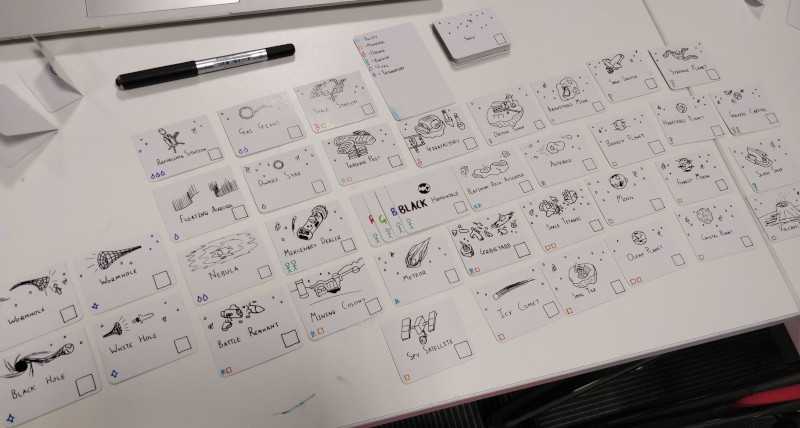