Seriously is there no middle ground with this news thing? Now I get why some days the national news will be a cat is stuck in a tree and other days it'll be the worsening of the brexit-apocalypse to raids on national tea supplies.

Just a very brief reminder about the merch mentioned last week. Hoodies are now no longer available so please don't try to order them anymore. Badges are still on sale until May 12th at midnight (once again with the fairytale midnight stuff...), including the 'Pronoun and pride' badges and the 'Ex-Exec' badges, each costing £1. Statuettes are also only available until May 12th; costing £5.10 each and available in the design seen at the term 2 quiz as mentioned in last week's newsletter. If you're still wanting badges or statuettes please get your orders in soon!

When asking if there was any tickets left for the megagame I was directed to a line from Jon saying: "we have Alien's Last Golden Ticket (for the Megagame)". My silly earthling brain thought this was some weird feature that the aliens were going to have in the game, but no I just read it wrong, although a golden ticket to enter the alien base and peruse cough cough STEAL cough cough their tech may be useful... Anyway, ONE MEGAGAME TICKET LEFT, COME GET IT, IT'LL BE REALLY FUN AND COOL AND STUFF!

As boring as these can be, I'm required to inform you all that we have updated our privacy policy with a few changes. If you are really interested in the privacy policy, it is available for your reading pleasure from all good retailers (10/10 would read again). Also you can just read it at this link.

Cast your mind back to the AGM and you'll remember a point about non-exec society members being allowed into exec meetings. This is a thing that you can do, you're more than welcome to come along to any exec meeting, just let one of the exec know before hand either in person, on the Facebook page or on the society Discord, links for which are at the bottom of the newsletter. The minutes for the previous meeting can be found by following this link. Our next meeting is Friday 10th May, 4-5pm, room TBC so if interested in coming just ask a member of the exec.

Those of you who use the Warwick Tabletop website will notice there are few changes which make the website much more accessible and 'Websitey', also a lot of these changes make writing and publishing these newsletters easier for me so big thanks to Thomas, our web admin, for sorting all that!

Once again, totally not a near perfect copy-paste job, I swear.

RPGs are, as usual, being run at the discretion of the DMs and more info can be found on them on the events page, there are murmurings of a Middle Earth oneshot coming up in the future at some point, and when Gondor lights the beacons calling for your aid I shall let you know.

Last week saw my first board games session attendance since week 8 of term 2, it felt amazing! Obviously, the only natural way for a smooth transition back into board gaming was the beautifully orchestrated and poetic chaos that is 'Sidereal Confluence'. Of the 5 of us playing in the game, I was the only one who knew any of the rules, so I cried at Jakub to explain it all again for me, for both those that haven't played before, and because it's really confusing. In first place was Jon with 28 VPs, followed by myself on 25 VPs, third was Ibrahim with 19VPs, fourth was Tom with 11 VPs and last, but not least, Anakin with 9 VPs. I seriously recommend Sidereal to anyone that wants complex RTS for... the rest of time...?

Last week also saw the invention of the 'Bear Chariot' (TM), possibly the most curious mode of transport ever formed in an RPG, consisting of a druid casting Tenser's floating disk, transforming it into a bear and having a paladin with mounted combatant ride him while the sorcerer rode along on the floating disk. "BOOM, Bear Chariot" - Jon (RPGs Rep) 2019.

As if that weren't enough, Jon's RPG party also bettered their murder-hobo ways and went into battle... WITH A BATTLEPLAN. Yes, not seen since now, or at least not to this detail, the party developed a full battle plan on the whiteboard which can be seen in the gallery below.

Thank you very much once again for taking the time to read my Sunday night madness and lack of inspirational humor that is this newsletter.
Until next week. 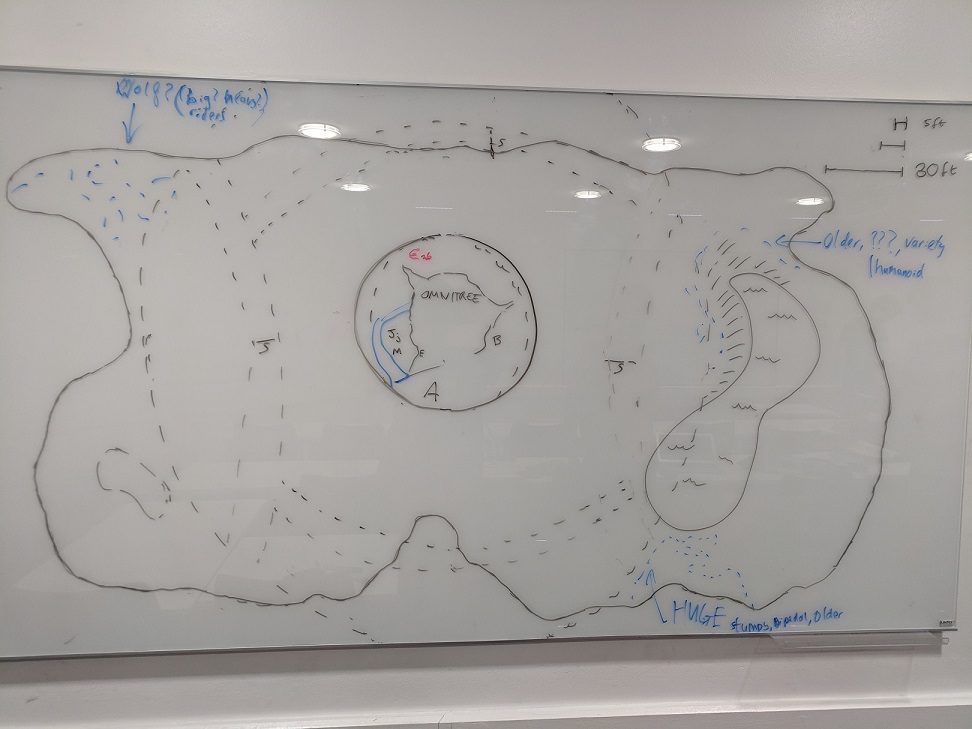