Hello and welcome to this slightly later newsletter, I wanted to wait until after we had lots of details of the week's events before writing because for the first time since the end of exams I have time to write a decent newsletter. So yes, amazingly we've all made it through another year, but this does sadly mean that you may end up suffering from tabletoposis, a chronic condition where the desire to fill one's tabletop needs is left unfulfilled for a prolonged time. Symptoms include a shaking of the hands similar to a dice rolling action, constant quoting of various society nuances and an inability to wait until it all begins again in term one of 2019. Anyways lots happened last week which hopefully I will summarise in this newsletter, hope you enjoy!

For those of you around at uni over summer we will still have a weekly event taking place. This will be a fusion of both boardgames and wargames which will both be taking place together on Wednesdays. Keep your eyes on the Facebook page for where these will be or speak to our holiday officer Nigel. CCGs people are also welcome at these events and there will be space for your games, if you do want a specific room for CCGs booked contact Ares or Finnbar, ideally with at least a day's notice.

So the week began with Comp Soc vs. Tabletop Laserquest. Tabletop went into the night as the current champions, looking to retain the title, however some valiant play from Com Soc meant they proved to be victorious on the night, handing the title to them. This levels out the overall standings so be ready to bring your A-game next time so we can get back on top!

Following this on Wednesday evening was our EGM. Thank you to all of you that turned up and congratulations to the winners of the egg tombola. Congratulations to Ares who is now officially our new Draft rep! All of the amendments voted on to the constitution are currently being done.

The term 3 tabletop quiz took place on Thursday evening and comprised of 6 rounds, plus a final EVER crazy random and totally bizarre John round that we've come to know and love. Congratulations to 404 Team name not found, for winning the quiz with a rather impressive 37.5 points, narrowly coming first by 1.5 points. They won a range of faction related goodies. The bonus John round was won by 404TNNF and Claw of the Bear, they are the lucky winners of two brand new Nintendo Switches! (PSA: They were actually just light switches with Nintendo written on them...).

Friday saw the long awaited arrival of the 'Watch the Skies' megagame. I think I, the Russian foreign secretary, speak for all nations and aliens alike that it was an exceptionally enjoyable day! I would like to thank on behalf of the society the control for the running of the game, but mainly the incredible amount of time and effort put into the whole thing by Callum and Finnbar, they spent so long getting this amazing day ready and somehow managed to exceed the generated hype. So what happened you might ask? Allow me to give you a rough step by step time-line on how close the world cam to total catastrophe multiple times but still prevailed, this will be a semi-Russian account of the game given this was my perspective:

Friday and Saturday saw the running of our stall at Socs Fair for the university's open days. Thank you to all the exec that ran this, it appeared to be very successful, and vastly superior to other stalls!

Last but not least, the boardgames extravaganza happened this weekend. Very similar to our usual boardgames weekend shenanigans so I won't go into it too much. I will however give you a handful of quotes that I've heard throughout the weekend:

During Spyfall at 2am
Person 1: So... what's your opinion on breastfeeding...?
Literally everyone else: WHAT?! WHY?!

Also walking in on Monday morning to find Callum and Finnbar had somehow manged to each produce beds out of those chairs in B2.02 and actually sleep on them was amusing.

Anyway I hope those of you that came to the week's events enjoyed them, it has been a crazy fun week. But sadly (or not so sadly depending on how your year's been) that is it for this year's newsletters. I hope you've all had a great year with us and hope you all get back to your homes safely for the summer and enjoy whatever plans you have. Please renew your membership next year with us for what should be another crazy year of tabletop madness! 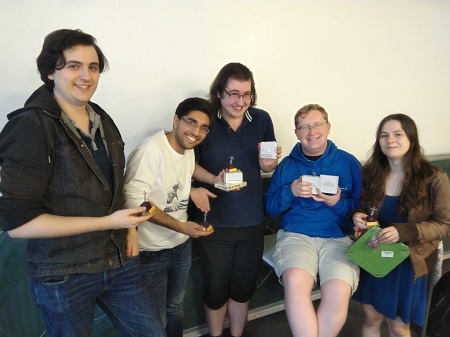 The Winners of the Term 3 Quiz! 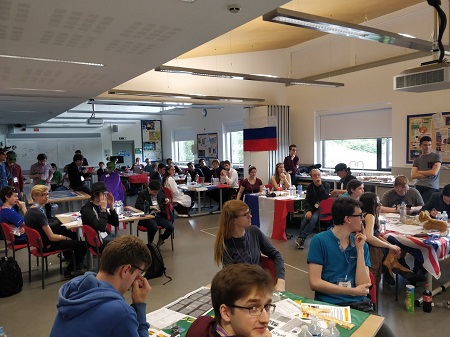 The Central room of the Megagame.