Hi everybody! I hope you had a great summer, and if you're joining us for the first time this year, welcome! Leave your shoes by the door.
I'm Finnbar the Communications Officer, which means I send you a newsletter every week! I'm so sorry. More seriously, this is the place for announcements about events and other happenings, as well as whatever jokes (some more dramatic than others) I can slip into here. I hope you enjoy reading this!

What did we do this summer?

Despite the fact that most people were at home during the summer, things still happened! People continued to meet up for board games, wargames and card games. We also got some new board games - Sushi Go Party (draft the best meal!) and Through The Ages (be the best at the concept of time), as pictured below. Finally, another postgrad board games event was run at the Dirty Duck to much success, with many board games played. 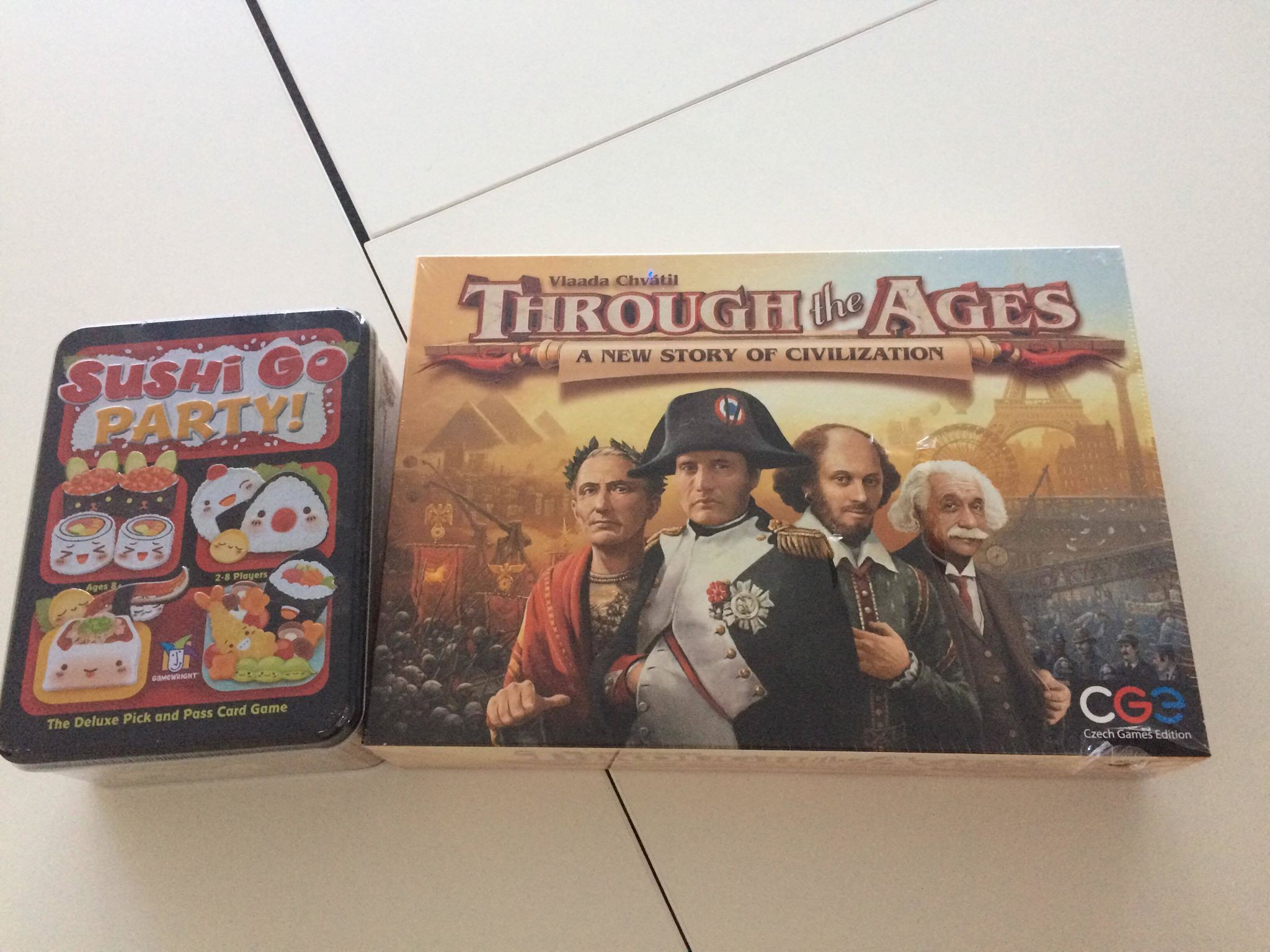 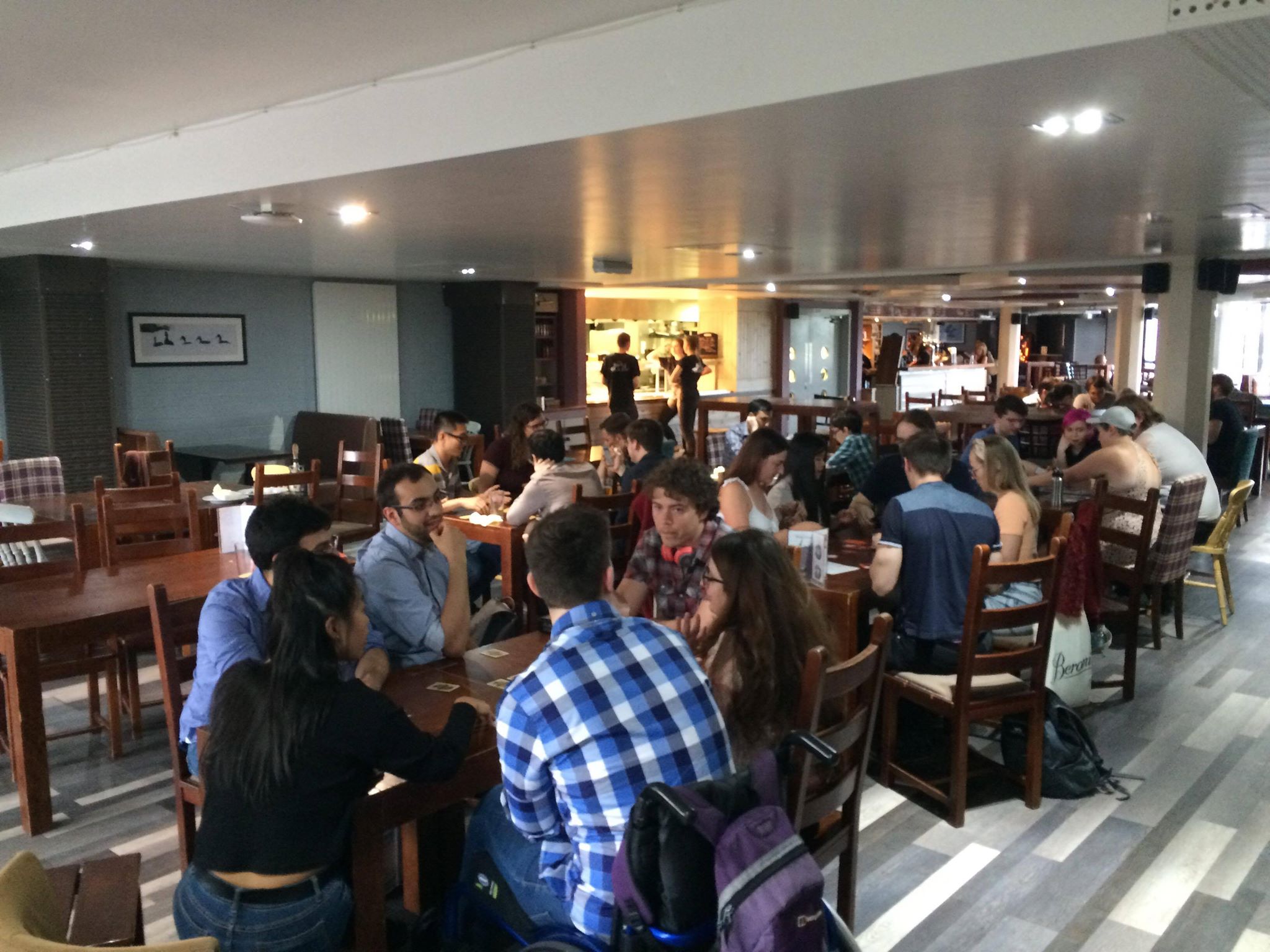 Also thanks to the tireless work of the LARP Reps, Unity 6 was released with much excitement! And then Unity 6.0.1 was released due to much questioning and loophole finding. Unity is the system that our local LARPs are run in - to find out more, why not go to one of our LARP events?

It's welcome week! Which means we'll be welcoming you back with our usual events, as well as an Introductory RPGs special event. Us exec will be on hand teaching some of our favourite games, so please join us even if you're a total beginner. That's not to say that we won't teach people in any other weeks though, we're just making a special effort to do so this week.

Our usual wargames session! For welcome week we have many existing, experienced members around to teach you their favourite wargame, so this is the place to go for a friendly (or at least as friendly as war can be) game of Warhammer, X-wing, Warmachine and more! So whether you’d like to send Orks and Eldar into battle, or be Luke Skywalker and fly around controlling the tides of war, we’d love to see you there.

For those of you unfamiliar with a Magic draft, you get boosters of cards, select your favourites (or at least, the least bad cards) as you pass them around the table, and use those cards to build a deck. This is an excellent way to build your collection! In this week’s draft we’ll be drafting the M19 set (you’ll likely know better than me what that means). It’s £8, reduced by £2 per pack you bring yourself. Furthermore, the prizes for the draft are Dominaria boosters, which our Magic Draft Rep says may contain “insane value”; I don’t rate them though because they have too few dinosaurs (Ixalan or nothing). That’s random boosters for you, I guess. If you're completely new to Magic, we recommend you go to our Casual Card Games session (see below) before diving into a draft!

This is our massive weekly board gaming session which runs from 2pm until 10pm (a whole eight hours of boardgaming fun) - so drop in whenever you’d like and for as long as you'd like! Whether you’re looking for an eight-hour long epic or maybe something with a slightly more sensible length, there’ll be a game for you, with many smaller games available so please don’t feel intimidated. There are always exec members around happy to teach new games, so don’t feel like you have to be some board games expert to join us.

More card games, because apparently one event a week isn’t enough for the Magic players! More seriously, this is the place to go for Commander, Yu-Gi-Oh!, Pokémon or Netrunner (please Netrunner players, we need more of you). Whether you’re an inexperienced planeswalker who wants to learn the ways of Magic or the best hacker who knows everything about Netrunner, there’s fun to be had in this casual, beginner friendly session! Don't worry if you don't have decks though, as there will certainly be some intro decks for Magic and Netrunner.

This weekend is special, it turns out, with a massive collection of one-shots (single session roleplaying games) being run! Many systems will be being played, including Dungeons and Dragons 5e, Age of Rebellion (Star Wars!) and Call of Cthulhu. It's the perfect time to try out roleplaying in a friendly setting with many new people, and then later in term you can join a full campaign! The website is host to a variety of signups for campaigns - just look on our Events page! Afterwards, there’s a pub social at The Phantom Coach at 7pm for everyone involved in the society (not just those playing RPGs) so you can eat and socialise with the new friends you’ve made and meet all the exec. Wow, food.

In LARP, you get to wear armour and actually fight (albeit with safer foam weaponry) while playing a character or monster! If that sounds like your thing, people will be getting set up in OC0.01, so head there to get changed and then existing members will guide you on your adventure (like Gandalf I guess, except there's many of them rather than just one so... I'm getting distracted). It’ll be the first outing of Unity 6.0.1 (which has simplified previous editions), so don’t feel like you have to be some kind of Unity expert to join us - our helpful and knowledgeable LARP reps will be there to run a great adventure and help out with any rules difficulties.

Anyway, thank you for reading this far and I hope to see you at some of our events!