Dashing into cover, you find a space marine boltgun on the floor. You scramble to pick it up, peer over the top of the rock you hide behind and attempt a shot at an approaching ork. As you squeeze the trigger, two chambers on the back of the gun spin from 1-6, they land on a 5 and a 2. As the numbers are locked in, a bullet fires from the barrel and meets the target. You've never seen such a mechanism before. You continue in this manner, assisting the space marines in the defence of your village, slowly pushing back the invading ork army. You notice many other soldiers around you have various differing pieces of equipment, all with similar mechanisms use in offensive and defensive manners. It appears as if each weapon must first "roll" to hit, confirm a hit and then "roll" some level of damage. You suspect, like much in this world, it has similar logic to when you roll a d20 to check skills while on your many adventures.

As mentioned last week, our society's AGM is coming up later this term and continuing on our weekly introduction to elected positions, this week we have some words on the secretary and treasurer positions:
Secretary - The society Secretary (post currently held by Finnbar Keating), sometimes called the Vice President and other times called "the one that deals with the fires" is responsible for booking rooms and organising exec meetings. A big part of your role, however, is being aware of everything that the society is doing such that you can accurately run said meetings. This role involves working a lot with the President and is such a large time commitment, but is nonetheless very rewarding! If you've got any questions about this role, speak to Finnbar, who can be found at many of our events or on Discord (@finnbar).
Treasurer - As treasurer, your role is quite simple: make sure everyone gets the money to do what they want, while also ensuring that we still have resources to do other fun things! In addition to this, as a member of the Big Three (along with president and secretary) you may be expected to do slightly more than the job description to help out, such as going to fairs and contacting the SU about various matters (financial and otherwise). One part that hasn't be touched on recently is the requirement to try and find sponsors for the society - so be ready to send out many emails to companies! If you have any questions, please let me know on Discord (@l0negamer) or find me at an event.

The survey mentioned last week regarding your views on the current newsletter contents and format is only live for one more week before I respond to the suggestions and feedback. Please, please, PLEASE ensure you have taken the very brief two mins to fill out the survey and help me out by getting other society members to fill it out too. At the moment there have been about 26 responses out of roughly 200 members, 8 of which are exec (No offence to them but they proofread this garbage each week and so their feedback differs in value somewhat... Love you guys really...). You can find the survey at this link.

Another reminder that this week's draft is a one-off Dragons of Tarkir draft. There are still spaces available, if you want to join you can sign up here and check out the Facebook page here. £9 entry fee to partake and there will be no pack prizes.

"Race around an asteroid floating above the city of Waterdeep, as part of an army preparing for invasion! You will be playing alongside other tables in the same room, all working collaboratively to defend Stardock. There will be multiple targets and goals to achieve, Epic battles, roving NPCs visiting your tables, and only working together will you be able to succeed!" On Sunday 9th of February (12-7pm), in LIB 1+2, the society will be hosting a large-scale D&D adventure titled "Stardock Under Siege". This is a chance to get involved with a society 'first' and play for the day alongside many other adventurers. Check out the snazzy art-vertisement in the gallery (courtesy of Ares)! Currently no sign-ups but stay posted, they'll be out soon-ish I hope.

"Tragedy has struck in the Forgotten Realms! Morrigan Dawnguard, the matriarch of a powerful and proud noble house, has sadly passed away. Her four children waste no time in preparing a ceremonous funeral, including a night of solemn prayer inside the family catacombs. However, this will be the first time in a long while that the whole family has come together, and in the silent depths of the funeral chamber, old fueds will resurface and long-held grudges will reap their bloody toll..." Yup, the society, namely LARP and RPGs, is hosting a murder mystery night in week 7 of this term. This event will be a chance to engage in roleplaying and deduction work, attempting to uncover the truth behind a terrible murder (No, don't worry, no one is actually dying). If you want to get involved, for now please fill in this survey, querying what exactly you'd like to do, and join the event discord (7ANPxC9).

There's talk of an X-wing tournament later on in term at some stage. If you're interested please fill in this quick doodle poll for when would be best for you so we can try to accommodate as many people as possible.

All the same as last week except Wednesday's board games is in B2.01.

Last week we tried out Pitchcar, a hilarious racing game where your car is a small wooden counter and the aim is to flick it around a custom track for three laps the fastest. There will spills, massive pile-ups on every corner and cars flying off the track at random angles and damaging speeds but it all essentially ended with Finnbar having an extremely nerve-wracking round where they flopped what should've been the final flick of their game and sat agonisingly 2mm away from the finish. See the photo of this moment below, complete with immense artistic skill from yours truly.

That's it for this week. I hope the return back to uni wasn't too laborious for you all. Have a good week! 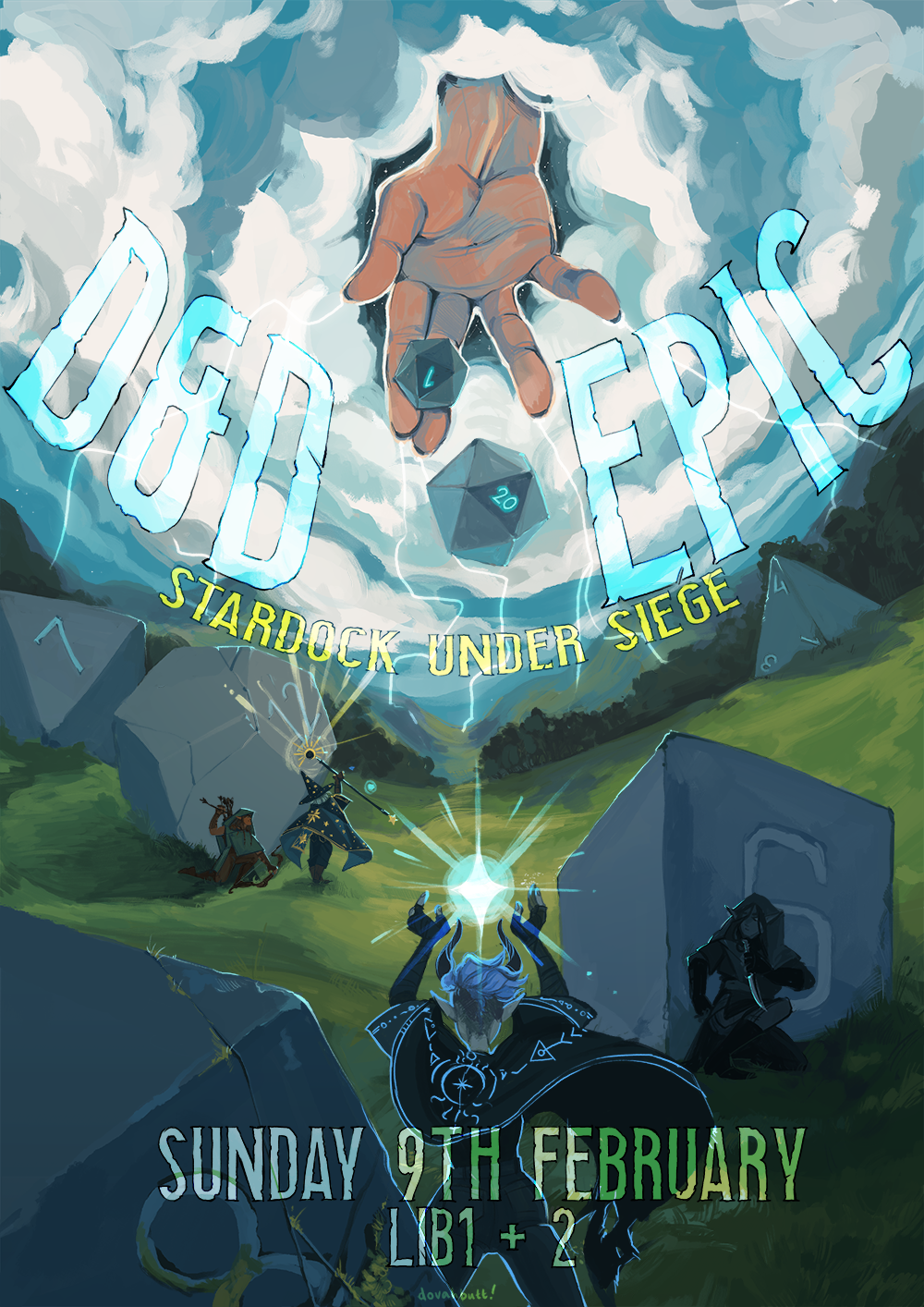 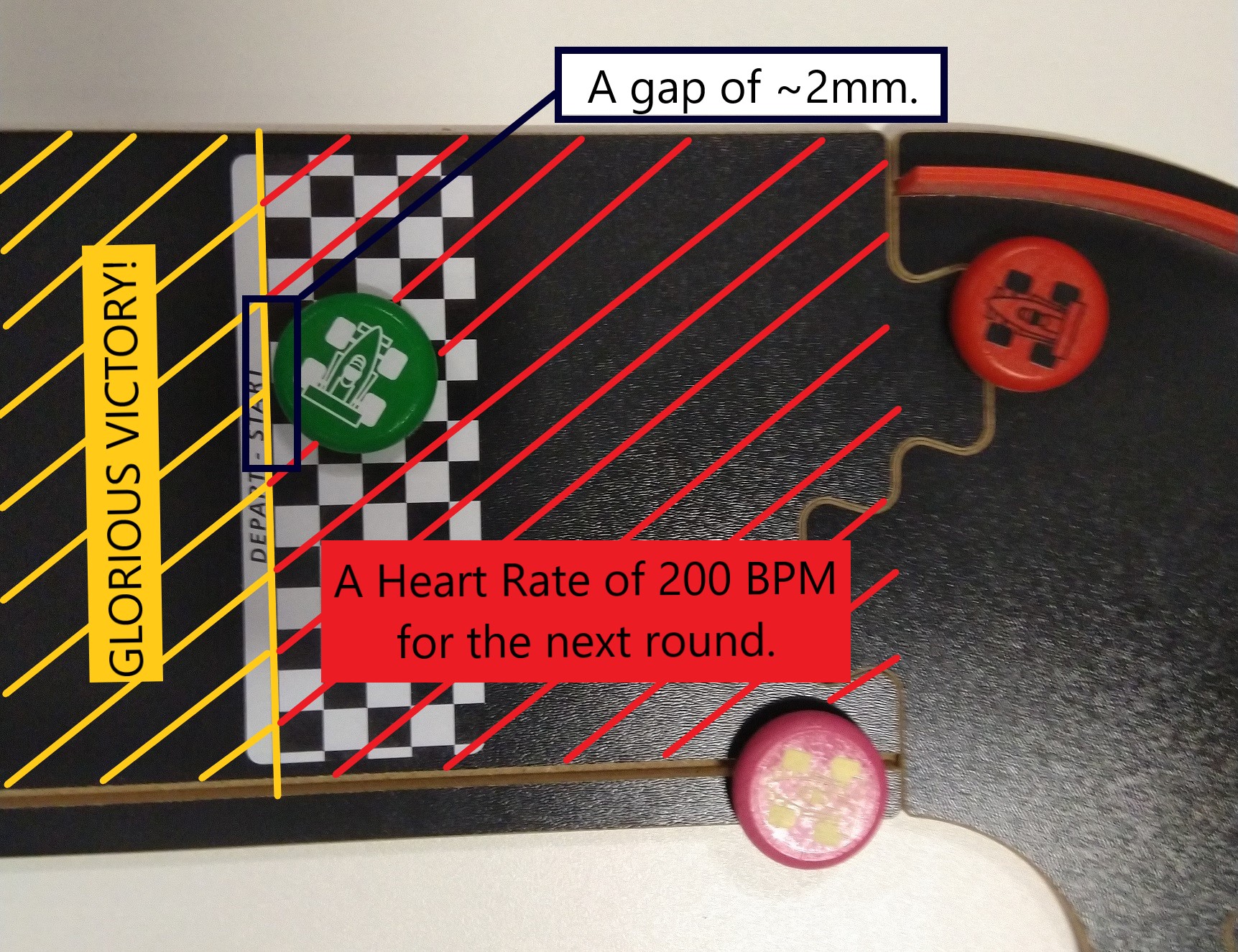