Week 3 Newsletter - "Are Leprechauns Prehistoric?" and Other Questions Asked During Codenames

It's week three! At least I think it is, I barely know what day of the week it is at this point, let alone what week it is of the term. Anyway, I thought we could play a game of Codenames, that's a good game! I'll be the spymaster for both teams (because that makes sense...), and we'll have Finn on the red team and Bar on the blue team. Okay, red team first! Your first clue is Special events, 2.

Finn: So I think weekend is the obvious one.
Bar: Weekends aren't special, they happen at the end of every week. Meanwhile, Mexico has special events sometimes!
Finn: But the tabletop weekend is happening during the weekend of week five! Which is actually kind of soon now. There'll be all kinds of games from all the different parts of the society, so if you've not had a chance to try something out, the weekend will be a good time to do so - just drop in for as long or as little as you like. We'll update you with events being run during the weekend closer to the time!
["Weekend" is tapped, and a red agent placed on it.]

Finn: I'm thinking Netrunner.
Bar: I'm thinking that it's discontinued, why would you even consider running such an event. Just choose Mexico already.
Finn: Just shush already. There's a Netrunner tournament designed for beginners running this weekend (with a limited cardpool), because it turns out it's still a fun game. It's best if you look at the Facebook event - there are lots of resources for newer players there and you can message the Facebook page if you have any questions, or find one of the Netrunner players at Board Games or Casual Card Games.
["Netrunner" is tapped, and a red agent is placed on it.]

Sure, now it's the blue team's turn. Your clue is Weekly, 6.

Bar: Well, considering this is a newsletter about the tabletop society, it's probably about their weekly events.
Finn: This is a newsletter? I thought this was the real life.
Bar: Maybe it's just fantasy.
Finn: ...caught in a landslide?
Bar: what are you doing. Anyway, there was a handy timetable, lemme find it:

["Wargames", "Magic", "Boardgames", "Card Games" and "LARP" are tapped, all getting blue agents.]
Finn: This is ridiculous
Bar: No, it's skill. Anyway, I'm thinking the sixth one is RPGs, as even though there isn't a regular weekly drop-in event, Saturdays are when the majority of the RPGs are held. If you're interested in taking part in a one-shot or campaign, take a look at the Events page. This is frequently updated, especially with Lawful Tim putting up a new one-shot every Monday.
["RPGs" is tapped, and predictably gets a blue agent.]
Finn: You better have a good clue for me.

Okay, red team: you get Prehistoric, 3
Finn: WHAT IS THAT EVEN MEANT TO MEAN
Bar: Prehistoric: "Of, relating to, or belonging to the era be-"
Finn: Yes I know what it means, I was kind of hoping for a clue about the society, not about prehistory

Finn: Umm, well Casual Card Games was pretty great, because there were actually a wide variety of games being played! At one point there was a table of Magic, a table of Yu-Gi-Oh and three tables of Netrunner.
Bar: Given the whole dead game thing, that's quite impressive. Also, it turns out the infinite power of LARP is only stopped by one force - rain. The usual LARP session was replaced by an indoor in-character social, which was probably for the best given the awful weather.
Finn: Also it seems like the whole Timforce thing has awakened a creative force within Jakub, who modified a GIF he found (below). The newsletter has fan art now, have we peaked? Is it all downhill from here?

Bar: It went downhill from when you opened your mouth, Finn. Also, are you stalling?
Finn: No I'm just telling everyone how great the week was. Also why is "jack of all bones, master of flesh" a card. How do these even relate to prehistoric?
Bar: Are leprechauns prehistoric?
Finn: What
Bar: Choose Mexico already
Finn: FINE I'll choose Mexico
["Mexico" is tapped. To nobody's surprise, it was the assassin and the red team loses.]
Finn: I'm out 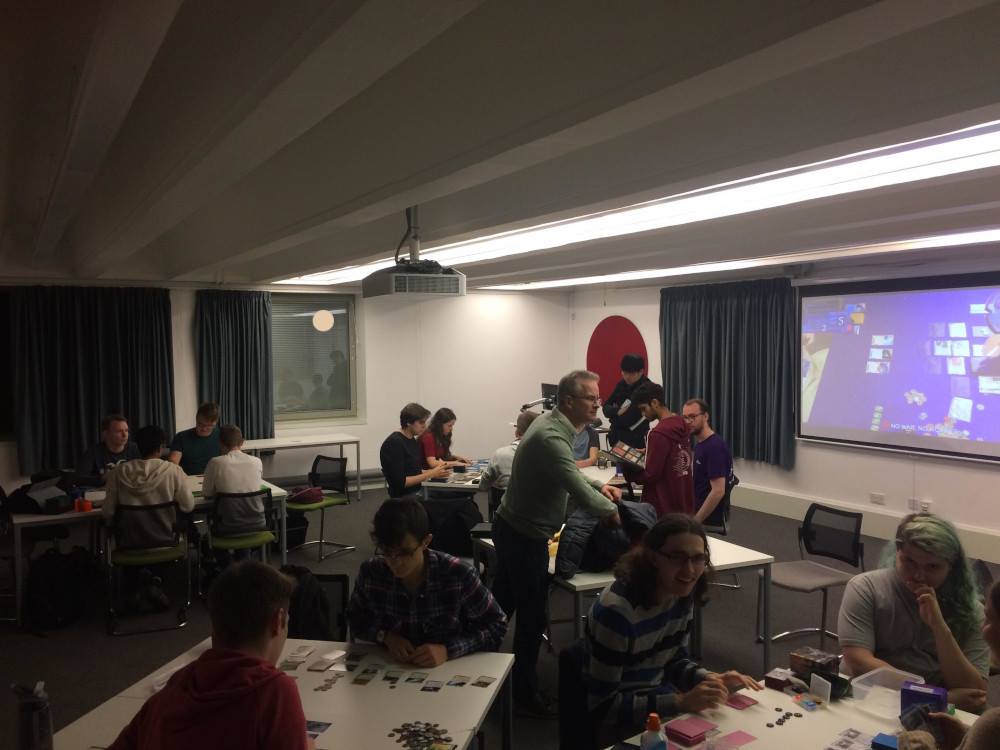