Sup nerds, nerd-adjacent people, and those who are reading tabletop society newsletters for completely non-nerd based reasons. I'm the new communications and operations officer for this society, Hannah, and I won this position after defeating multiple minor deities, taming a particularly enthusiastic raccoon, and surviving that particular kind of electoral chaos which spawns out of an AGM. Under my reign over the newsletter, you can expect less cool art, more weird ideas, occasional sacrifices to the gender cube, and probably too much writing. 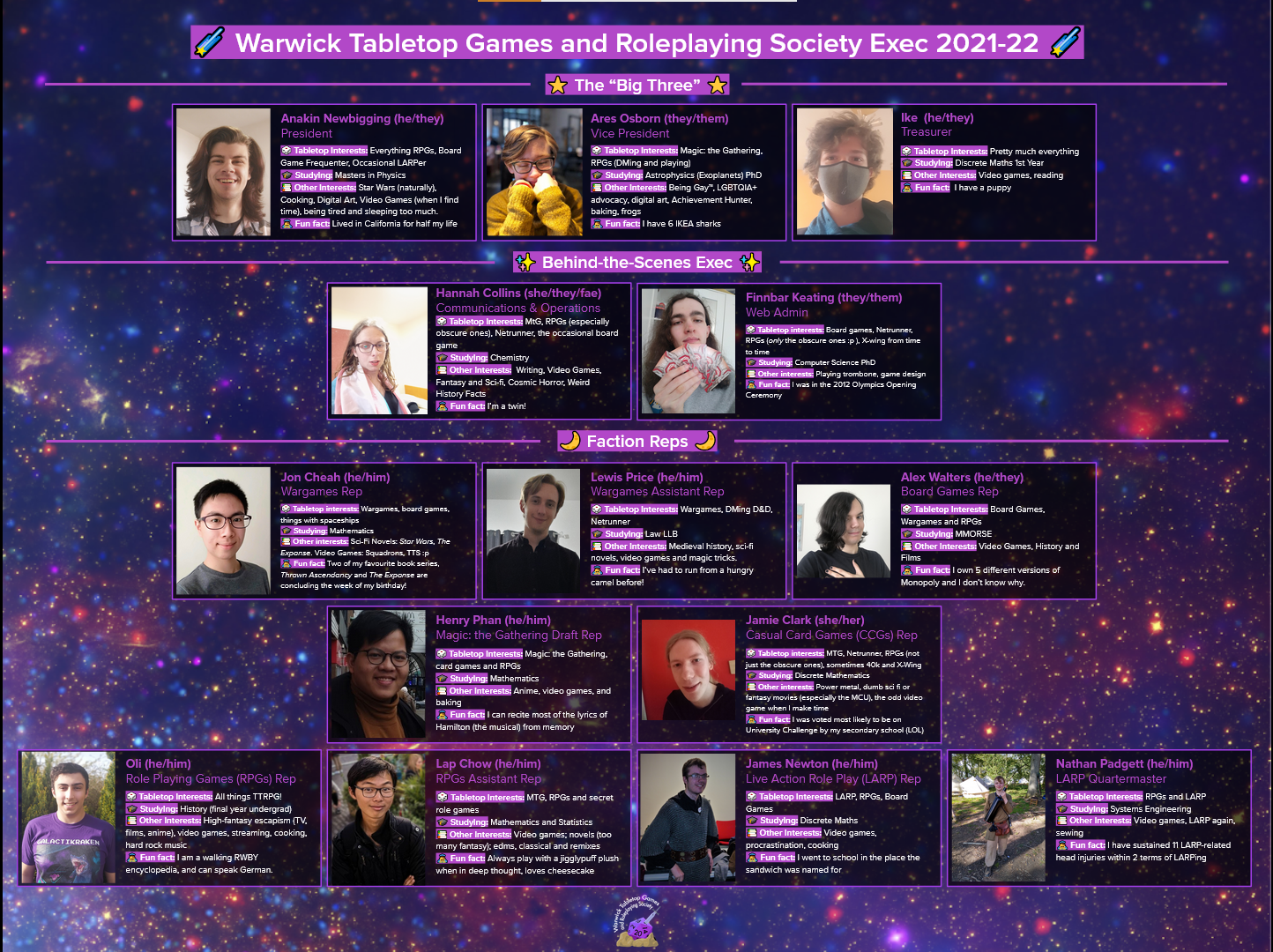 These are your new exec! We're in charge of keeping everything happening, and your point of contact for any questions about the society. (right click view image to make it bigger if you can't read it)
Massive thanks to all the leaving exec for making this society such a cool and welcoming place, and I can only hope to carry on that legacy (...through the power of funny newsletters, mostly)

We're running a Netrunner Startup League, playing one match a week for four weeks, starting from Sunday the 9th. If you're new or newish to netrunner, this is using the Startup card pool, so it's a relatively unintimidating card list to work with. The only prize is a shoutout in the newsletter so the stakes are basically 0. (I also accept bribes of cool art or item ideas for the end of newsletters, if you want to appear in this most hallowed of publications.) If you don’t know how to play Android: Netrunner, always feel free to come along on Thursday and ask for a game, or simply drop a message in #netrunner on the Discord. 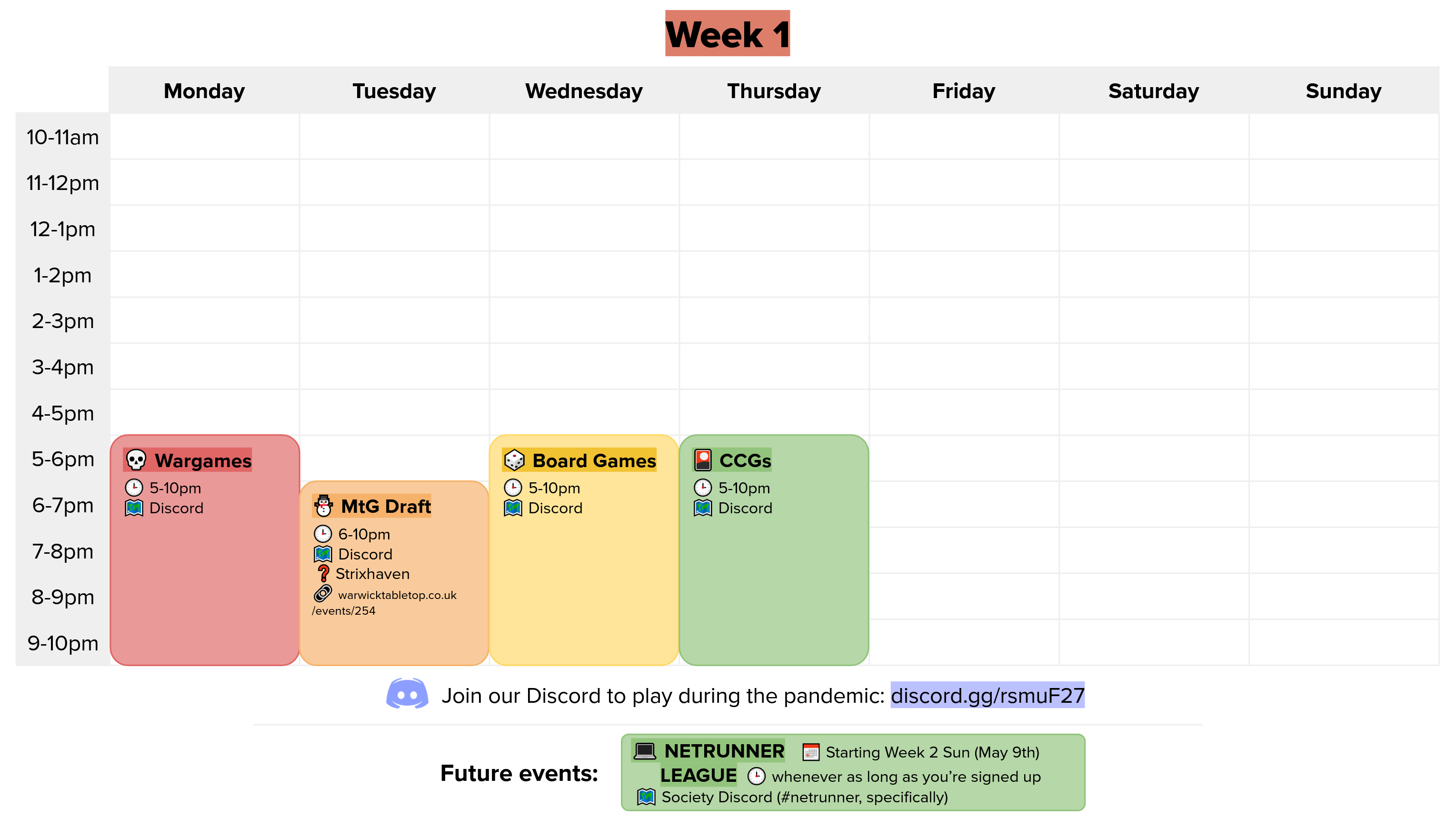 ❔ What's happening in the rest of term? ❔

Exams probably I don't know your timetable
Ohhhhhh you mean for tabletop
We'll be doing stuff online, as we have for the past year - weekly events will continue every week, which can be seen through these convenient timetables:

(A fun game if you know nothing about magic is to try and guess what the set codes stand for - if you trust Finnbar you can look forward to "The Story Returns" in late May, followed by "Masters Battle 1" in June.)

💭 What happened over the holidays? 💭

Through the power of the internet, we've done a fair few unofficial (and even official) events-weekly wargames, boardgames, and CCGs. There is after all, no holiday for and no escape from tabletop society. (You can just leave, but it doesn't count as an escape for the purposes of our advertising)

As for larger events, Netrunner had a tournament to celebrate the release of the new, beginner-friendly, sets System Update and System Gateway, which was a massive success. (somewhat late) Congrats to Josh on winning with Architects of Tomorrow and Zahya! Also, in other Cool Netrunner Facts, Franziska has got a position on the ACTUAL NISEI DESIGN TEAM. (as in, literally the people who make netrunner)

Also, BIG RPGs was a massive success! In the words of Anakin, who helped run it:
"The Great Knucklehead Rally was this year's big RPG and started with Kreena Copperknight's festival of the same name. Twenty seven adventurers, lead by 7 DMs, came to participate in ice fishing, ice sculpting, and theater. Much hilarity ensued as the combined force of goblins won the rally and the stage was filled with a cacophony of 'meows' as numerous adventurers act out Drizzt's displacer beast to name a couple of the events that took place during the endless winter. The festivities were cut short as several awakened animals came to warn everyone of a frost giant by the name of Echilakk who was inbound to reclaim the treasure stolen from her by Kreena and her husbands. The parties split to prepare for the battle, most of which decided it was most important to free some mammoths. In the end the stampede of mammoths they helped proved useful in securing victory over the giant's army throughout the tense battle where many found themselves pushed to their limits. Fortunately there was only one casualty, however two wolves perished as well as one goblin mecha-crab."

Other highlights lightning round! 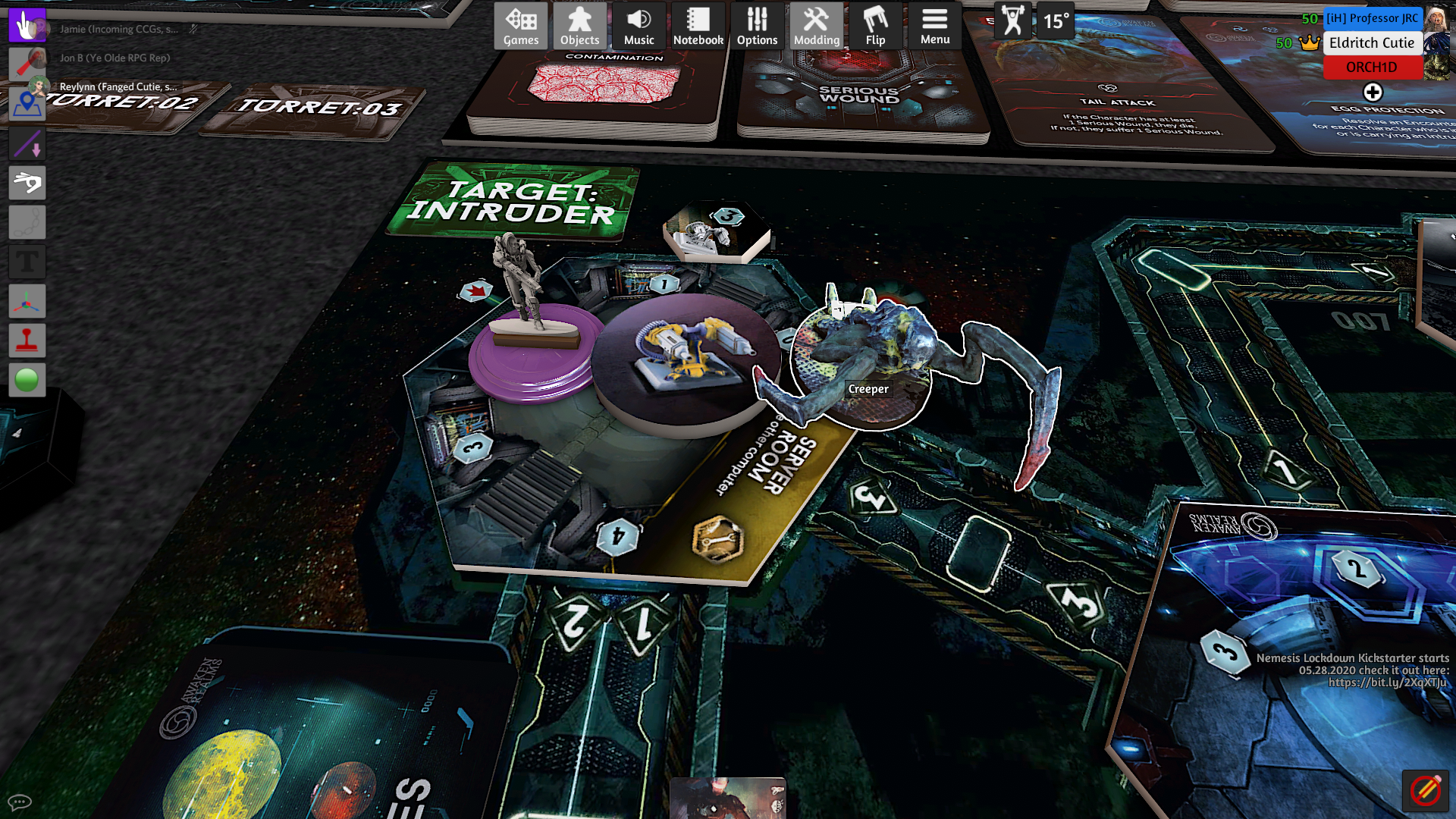 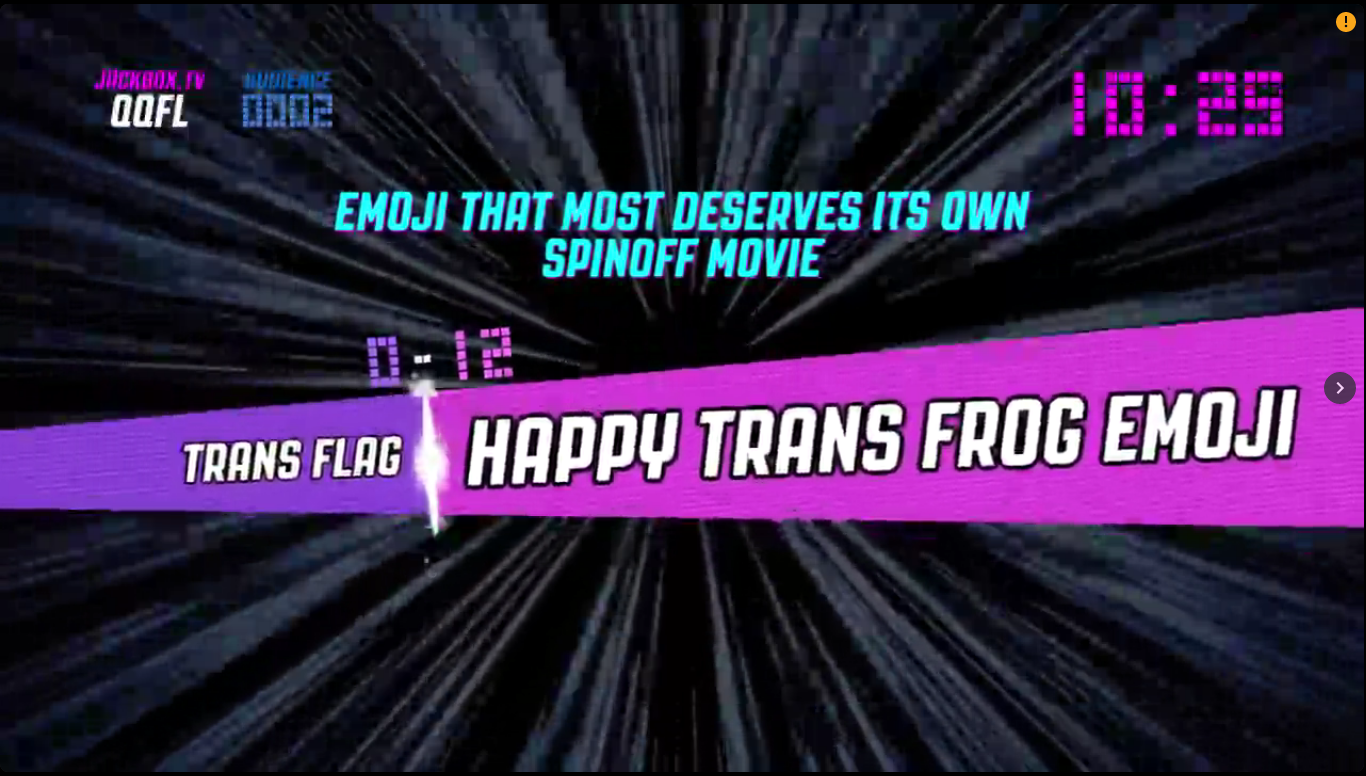 Through the combined powers of Jackbox and democracy, we have developed the sequel to Pride Flags-Pride Frogs! Much more portable, lovable, and poisonous! Available in all new phones starting from 2122!

Wash your hands, stay inside, stay safe, and come play some games with us (online!) 💛

I don't have a frog for you (sorry!) but I do have a few bits of random RPG loot for you to steal:

Hannah Collins (Communications and Operations, has a solid half a clue what she's doing)
@aceempress#9631 on Discord
hannah.a.collins@warwick.ac.uk