Week 10 Newsletter - Of Dinosaurs and Hoodies

[We pan to a meeting in a large skyscraper. Four figures are sat at a table, one of which looks slightly more important.]
CEO: It's the Christmas edition of the newsletter, what are we going to do for it?
Board Member 1: Add free snowflakes at the bottom!
Board Member 2: Make Christmas puns on every second line!
Finnbar: Write a newspaper article about the Tabletop Weekend and Nathan's profiteering dinosaur island?
[The three others stare at Finnbar.]
CEO: ...how did you get this job again?

Have you seen the lovely exec hoodies and thought "hm, I would like to buy one of those for myself so I can also feel comfy and warm while showing my love for the society, except maybe not in purple because I'd rather have it in a different colour"? Well, that's a very specific thought but I've got very good news for you, they are now available from the SU's website! It's even available to non-members, ooh. Adorned with our full society name on the right and a three line, twenty characters per line customisation on the left, you can own a unique part of society history, for one small payment of £23.50! Also it's got our logo on the back. You can get them from here until January 14th.

Oh no, the rooms have changed! It's the end of the world! Wait it's just the end of term never mind.

As always, if you're looking for RPG one-shots or campaigns, please check out our Events page. We'll endeavour to mention any big ones, as always, but given it's the end of term not much more is going to be run probably.

We ran a tournament with Coventry Uni's gaming society, in which much Modern (Magic: The Gathering) and Yu-Gi-Oh was played, albeit as two separate games (nobody took my great idea for combining the two games seriously... I'll just go to Dragon's Den and reap the profits instead). Both tournaments were won by players from Coventry (Modern by Marco and Yu-Gi-Oh by Luke), which is of course unforgivable and will start a ten-thousand year long card game-based war. We gave it a good fight though, with our only Yu-Gi-Oh player Hadib coming third and Warwick's Magic players claiming third through to sixth in the Modern tournament. All in all, a success!

Friday started off the weekend strong with our quiz, which was won by the team "uh, hm". They successfully navigated through things that rhyme with things but aren't the thing (not being distracted by one of the questions involving the holy binity of recycling, garden waste and other waste), minimalist art, Jeopardy and more! They won some cool dragon trophies and other neat stuff. The biggest thanks go to Ares for organising such a successful event and the other exec that wrote quiz rounds!

The tabletop weekend was a wonderful mess of tabletop games, including the fated game of Diplomacy. Seven countries started the game, only one finished after a few concessions and the German empire just sort of disappearing, whoops. I played as part of a team with Callum, playing Austria-Hungary (I was Hungary of course) and we were kind of wiped out about half way through the game but that's not important. One of the highlights of my weekend was playing Root (thanks Captain!), in which Patrick as the Arbiter became allies with the ruling cats, then lead them away from their base leaving it vulnerable. Also the birds had difficulties after an ambush left them unable to build, causing their entire government to collapse. Just one of those days, huh? The weekend also included the End of Term LARP, which our LARP Rep Jakup summarised as "Morgan Simnel, an important NPC, got shot and killed but not really". I'm intrigued!

Anyway, I hope you enjoyed the week as much as I did! This coming week is a bit less exciting (perhaps for the best, it was kind of exhausting!), but hopefully the usual events will be enough to tide people over before the holidays start. I don't know how this term has gone so quickly to be honest, but there'll be one more newsletter next week so don't be afeared, I'll be back next week with hopefully some exciting news related to a certain bird Pokémon... 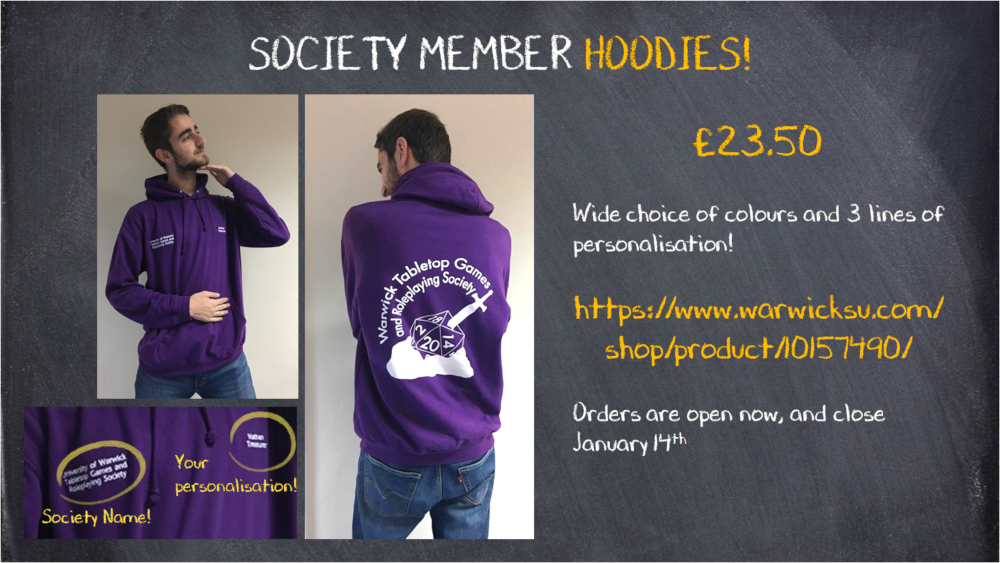 Get your hoodies from the SU website until January 14th! 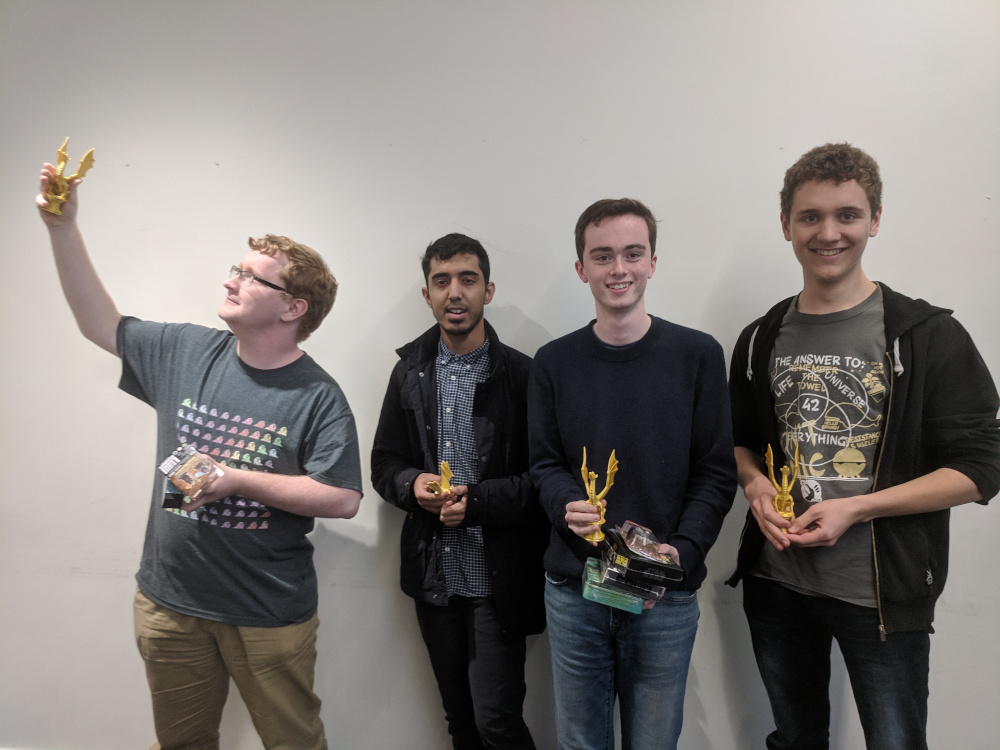 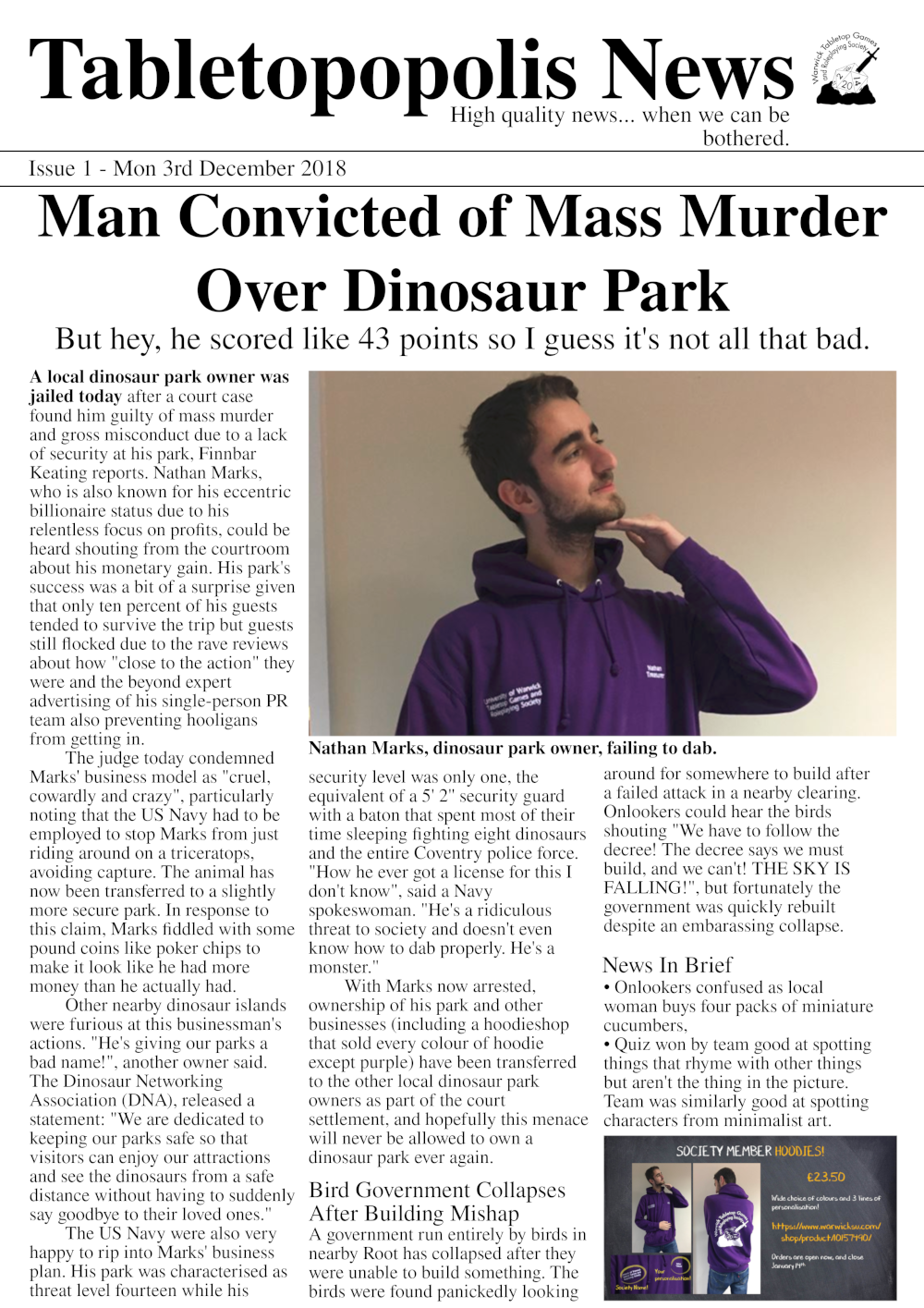