wait what? a newsletter? after the end of term? I'm as shocked as you are, to be honest. 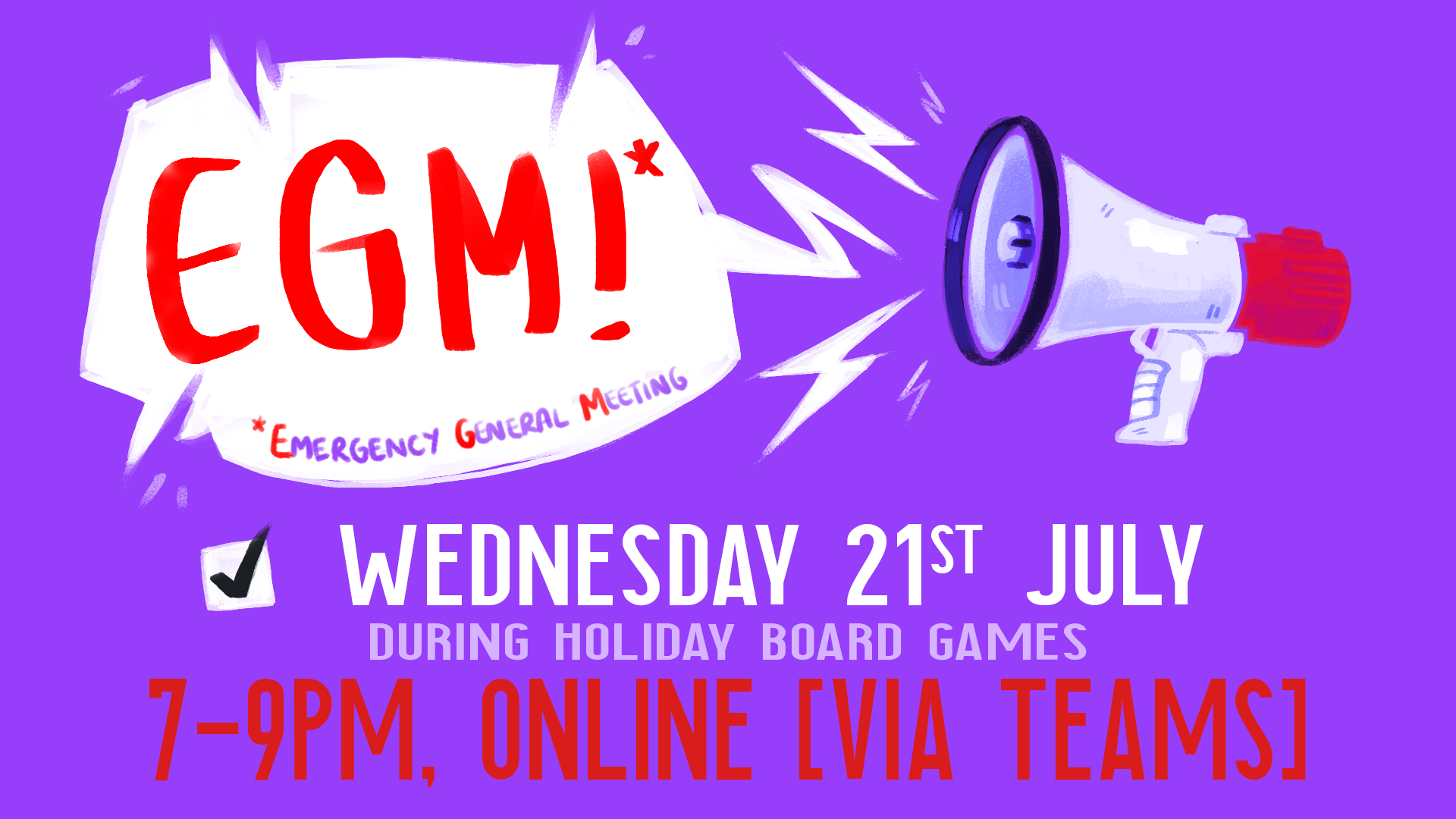 We're having an EGM on Wednesday the 21st of June, just over 2 weeks from now. Currently, there are two things that we've got lined up to adress: The moderation guidelines for our discord, and whether or not Casual Card Games (CCGs) should be renamed. If you wish to vote on these, you'll need to have society membership by two weeks beforehand (7pm, Wednesday 7th July). We also do need to hit quorum (20 members) to rename CCGs, since that's technically a constitution changing motion. If you want more details or have questions, here's the forum post about this EGM, by Ares, which will answer them better than me copying the entire post into this newsletter.

Miss any bits of Tabletop Radio? Want to share them with friends, or simply relive your favourite moments? Well now you can, as the VODs have been uploaded to youtube so you can watch them whenever strikes your fancy. You can find them on our youtube channel.

Also, as it turns out, when people throw £2000!!! at us, we run out of time to do incentives, so we have an Extra Bonus Stream (tm!) this Tuesday from 7-10pm. This isn't any of the stretch goal streams like Monsters on a Cruise Ship, this is just Finnbar and Anakin going through the kazoo and karaoke incentives (and Jamie doing Wooden Leg!). We even have an order of service, which will probably be ignored. 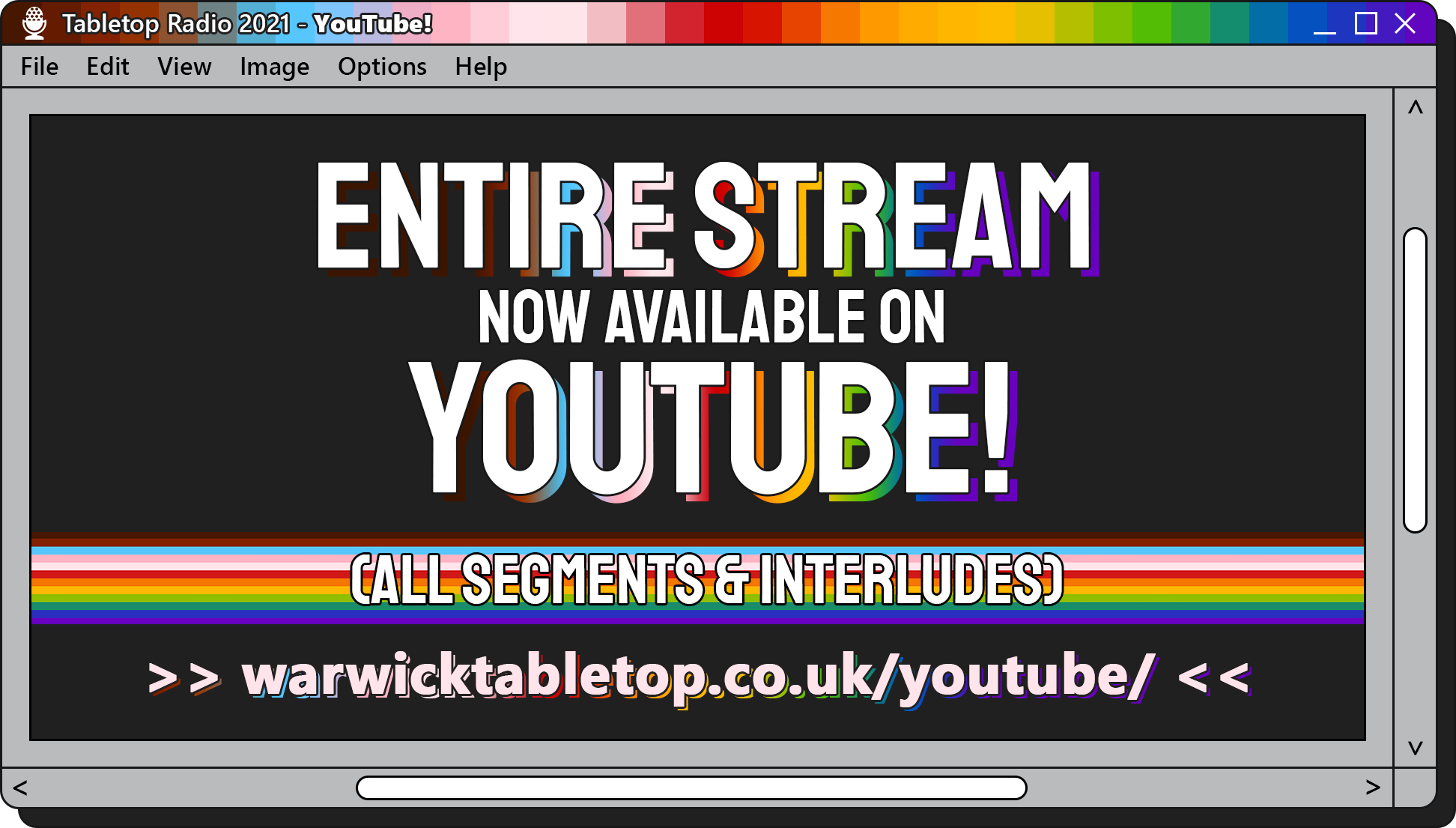 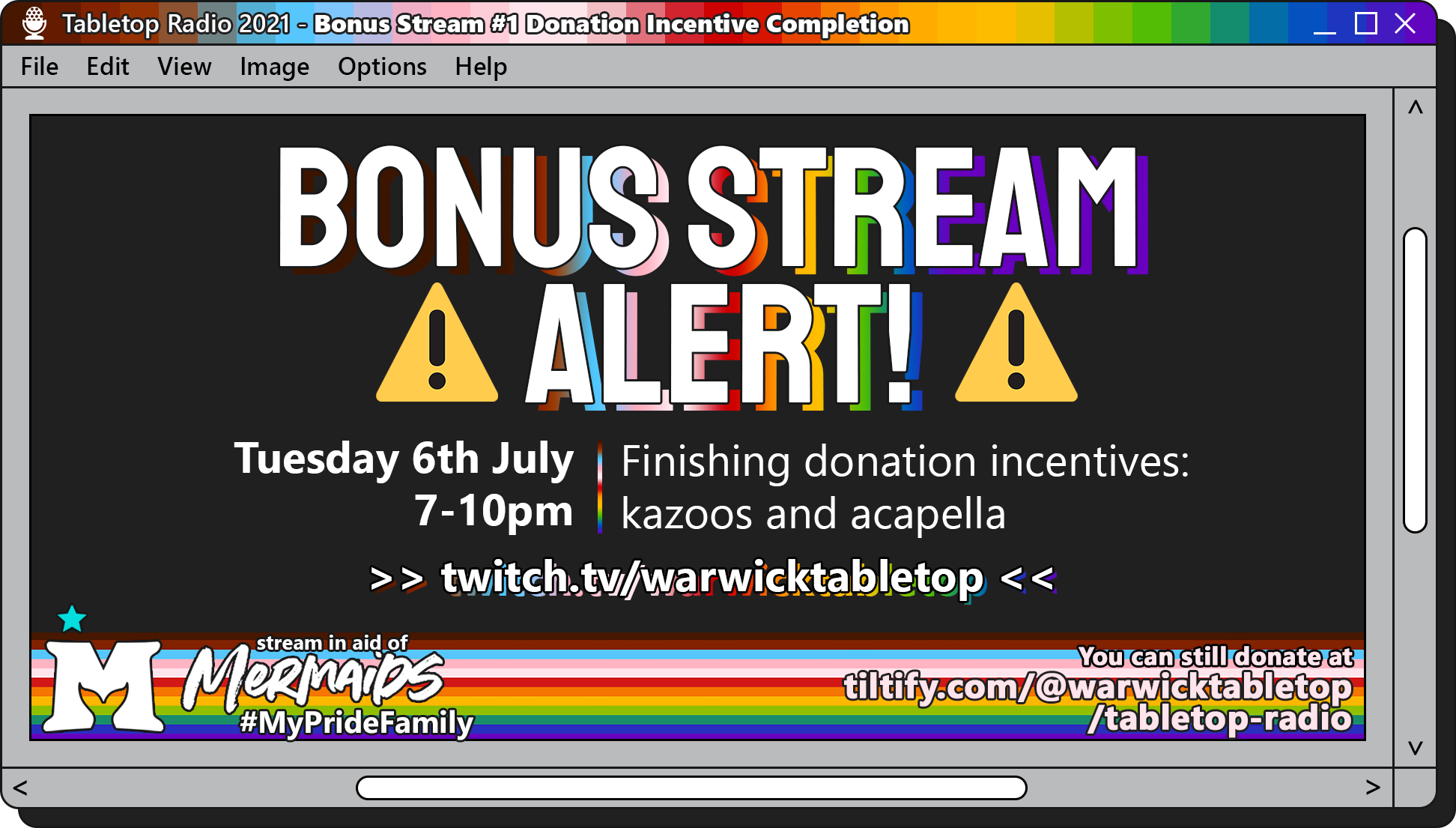 We're having an X-Wing tournament on July 10th, and there's still time to sign up! X-Wing is a Star Wars wargame about small-scale space battles. It's easy to pick up, and free to enter (though it will start at 9:30 am on that Saturday so there is the cost of having to wake up and not sleep in I guess?). If you're interested, but have no experience with the game, just show up to Wargames on Monday or ask on the Discord - someone will almost certainly be around to teach you, and it's not hard to pick up. (Citation - I learned the game in an afternoon a few weeks ago after yet another X-Wing thing showed up in highlights so I could try and explain things better.) You can sign up on the website event, and if you have any questions ask Jon (@Nahjo_Che#2025 on discord) 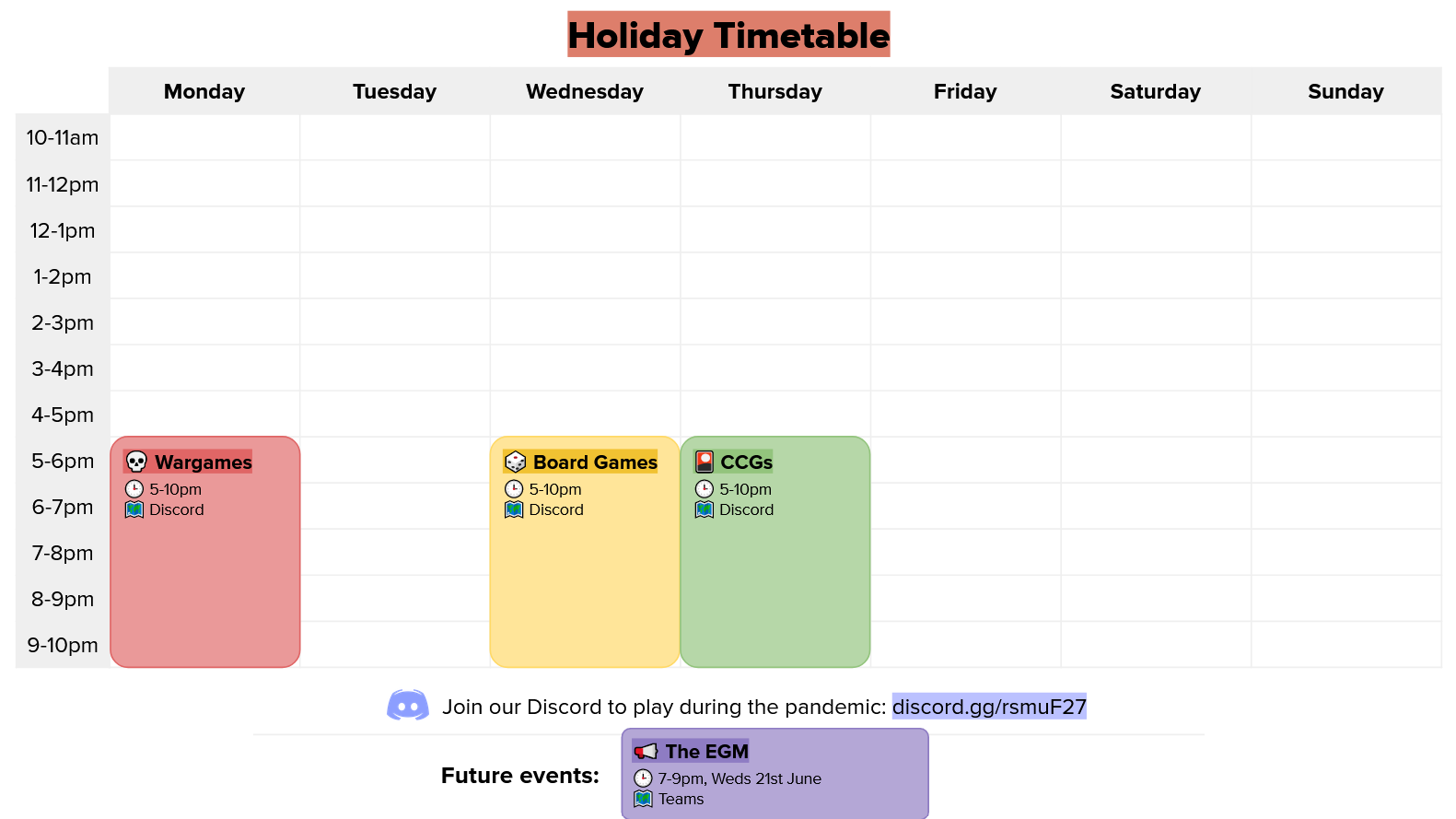 It's worth noting that as these are holiday events, they're somewhat unofficial and there's no guarantee exec will be there, but they will be informally organised because it turns out people like playing games. (I know, it came as a shock to me too. If you need to sit down for a moment to process this information, please do so.) If you want to, say, play Netrunner not on a Thursday, or play some X-Wing that will definitely end before 2am because me and Lewis are both responsible exec members who will not make poor decisions, or just generally do something not on its scheduled day, ask on the Discord! You'll probably find players! 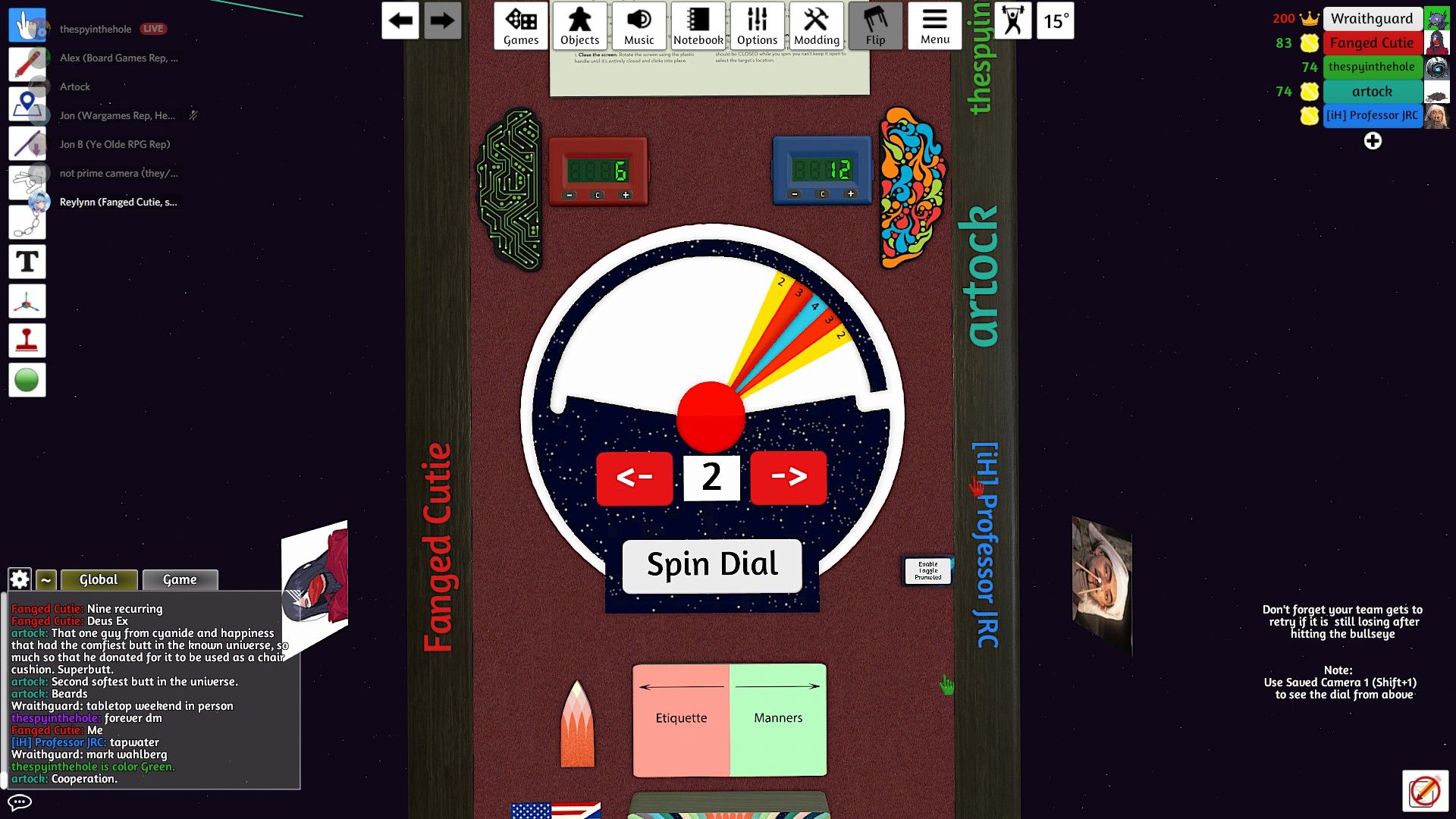 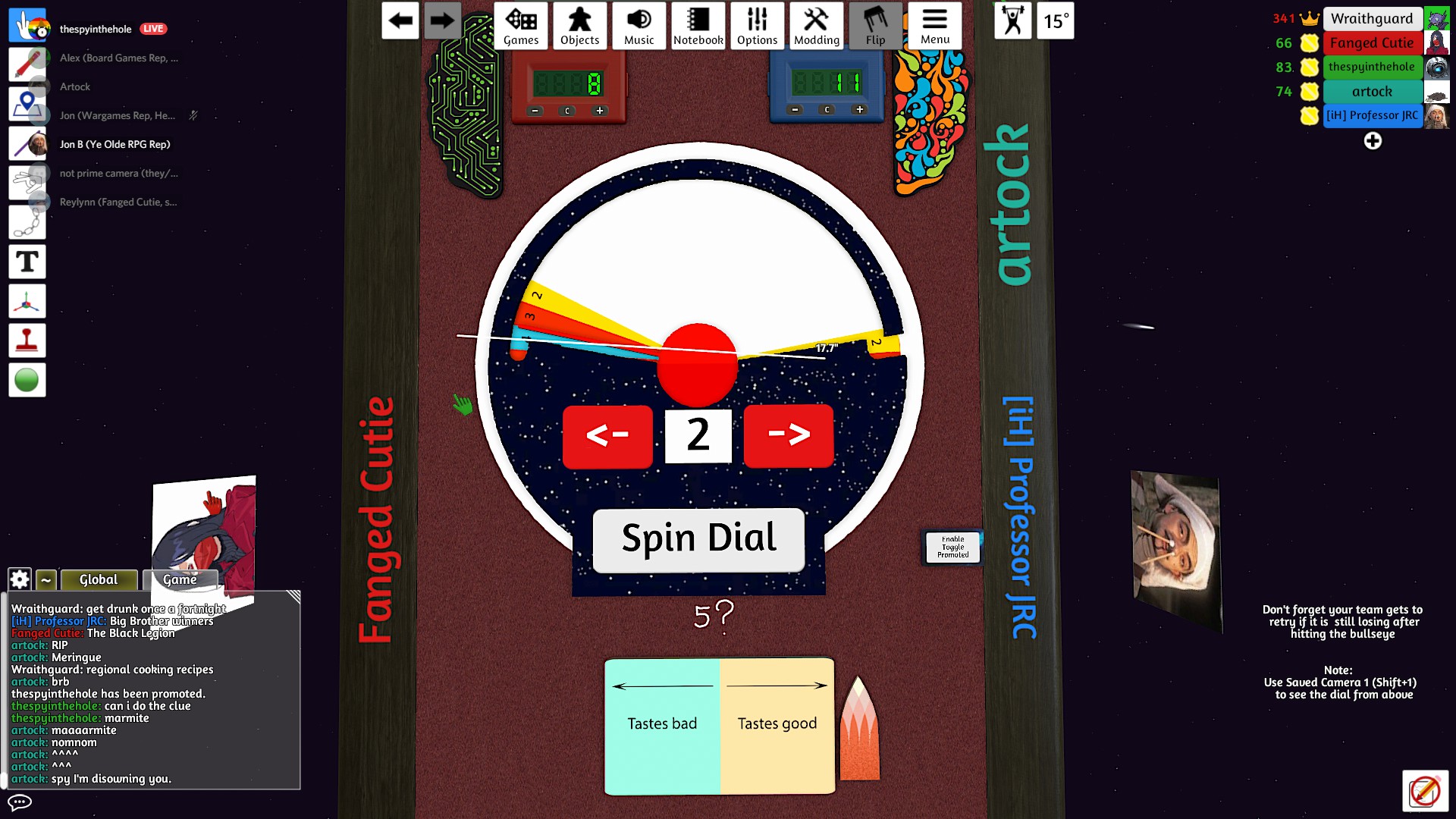 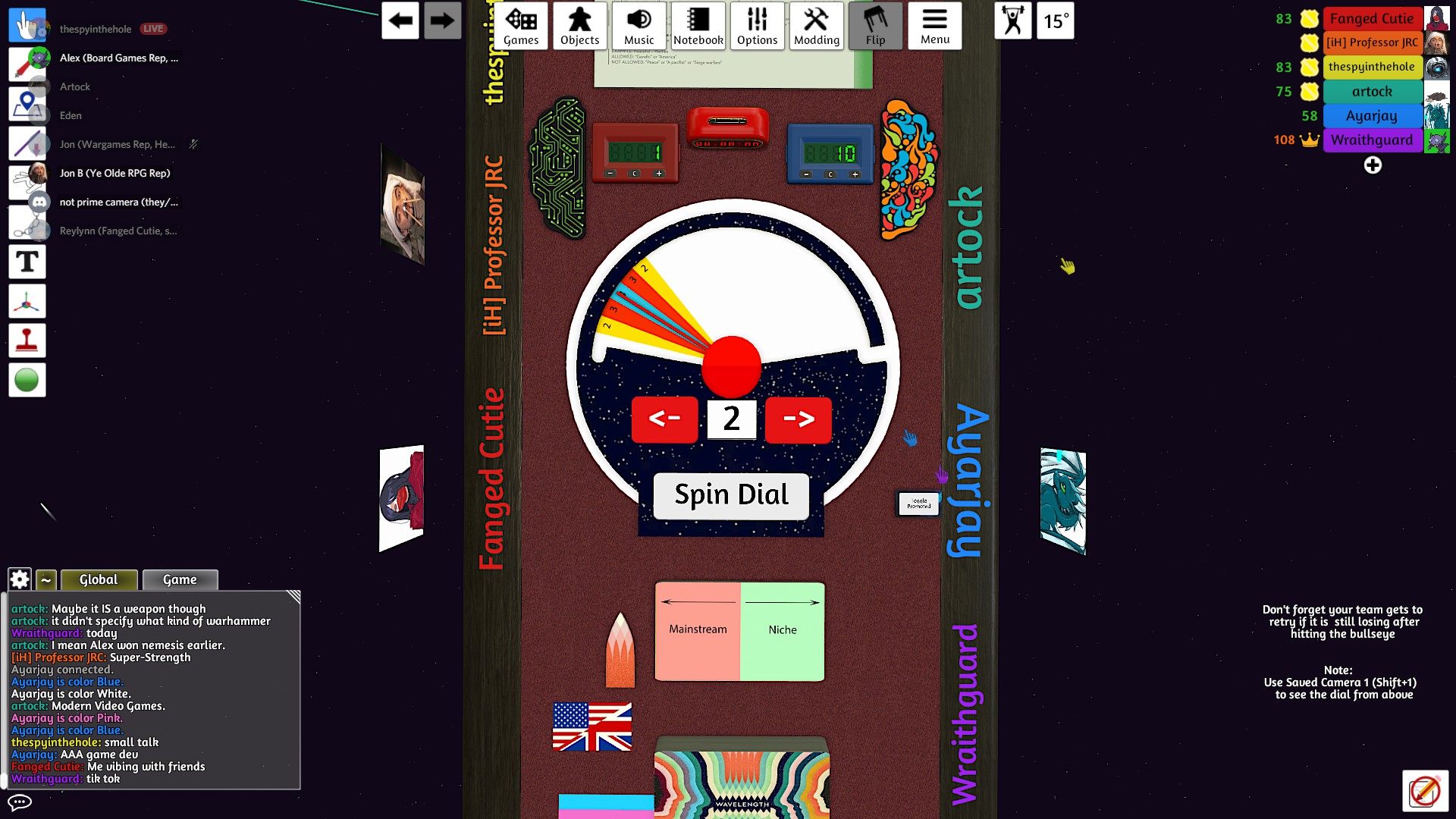 Archery practice at wavelength with three (!!!) bullseyes. (Though I will say one of them barely counts that's the easiest prompt in the universe). The other two (Cooperation on Etiquette-Manners and Tiktok on mainstream-niche) are impressive, but if there was any hesitation in deciding all the way bad for Marmite on a scale of Tastes bad-Tastes good then it doesn't count as at all impressive.

Some more Root was played over the week, and so once again it's time for me to put on my historian's beanie and write a timeline of the wood. (Mandatory disclaimer, I know very little about Root and what I do know I am often ignoring in favour of telling an absolutely wild story)

Once again, Twilight Imperium was played at this extravaganza. As I wasn't there, Alex wrote up a full summary of it. (Seriously, thanks so much! You didn't have to!): 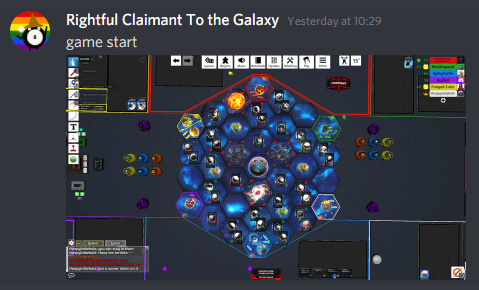 Twilight Imperium was played. A once in a blue moon event in which 6 people spend a whole day bickering their way to be the monarch of an ancient space Empire. In this week’s space opera, we were joined by: Plant People (Arborec), University of Warwick students (JolNar), Hoomans (Sol), Snake Ladies (Naalu), Pirates (Mentak) and Evil Pope (Winnu). The first round was a standard affair, all factions expanded their borders in preparation for the future. The drama truly began in the next round with all sorts of shots being fired. The ‘fragile’ JolNar and their immortal infantry pushed unexpectedly into Winnu controlled space and begin grabbing planets while Winnu’s gaze was diverted by the Jewel of the Empire. Mecatol Rex. The Winnu could not be distracted for too long though as before you could even blink the Mentak’s had convinced the planets guardians to let them land and had taken control of the planet. This was all under the shadow of some intense border disputes between Sol and the Pirates as the Arborec and Naalu watched on with glee as their empires grew unimpeded. Despite the JolNar’s early military success this was not matched when congress came into session. People watched on in horror as a JolNar professor was split apart and was hence not able to participate in the voting (as per congress rules of course). 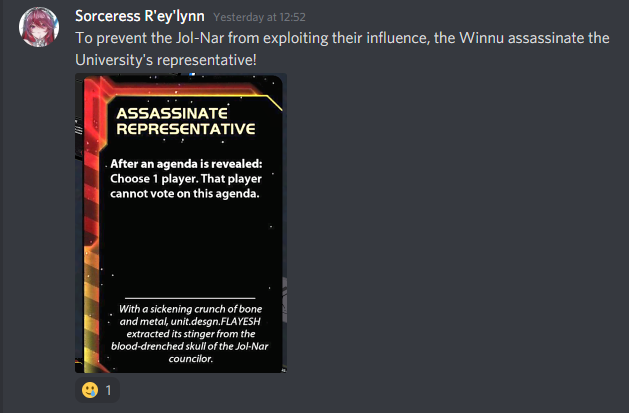 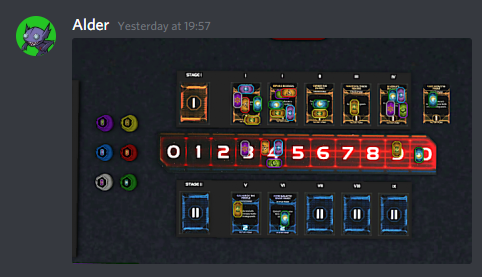 Round 3 was largely uneventful aside from the continued invasion of the Winnu by JolNar and the new offensive opened by the Arborec against the University. The cold war grew colder between the Pirates and Sol and the Naalu further expanded their borders without any quarrel. By round 4 any presumption of peace ceased to exist. The galaxy set ablaze. War consumed every race as the galaxy descended further into chaos. JolNar’s infantry continued to be immortal while the Naalu finally moved on JolNar as well seizing several abandoned worlds. The Cold War between the Mentaks and Sol had well and truly heated up though with the Mentak’s pushing their legitimate casus belli and sweeping away the Sol fleet. As round 5 began the galaxy turned their attention to Sol. As Sol retreated to Jord the planets on their outer rim were seized as war continued to rage between the Arborec and JolNar. Finally, on round 6 Sol finally clinched the game as the Naalu were not attacked enough to push forward their secret objectives despite considerable encouragement to the other factions. Anyway, that was certainly a way to spend a Sunday, would recommend to anyone with too much time on their hands.

No magic items here because I'm still writing a bunch from Tabletop Radio :P. I've got a bit less than I'd like to done this week because of travelling home and having to pack, as well as writing this newsletter, but I have ideas, which are often the hardest part of coming up with them. (Also, no promises yours will be as long as Lewis's just because I had to make rules for that one too, which necessarily increases the word count.)