Please get membership and verify it on the website if you haven't already! The membership alarm keeps going off to remind me to tell you this and if I lie hard enough I can convince myself it's the only barrier keeping me from having a reasonable sleep schedule.

Important reminder - if you haven't already done so you have until 12PM THIS THURSDAY to get membership! You need it to vote, to submit a motion for, or run for a position at the AGM

Just a reminder this week, as I will continue to do every week for the foreseeable future, the AGM is on the 2nd of March, in B2.02, from 7-9pm. If you want to find out more about the AGM check out the forum thread.

This week, we're looking at our two card-based reps, the Draft Rep and the CCGs rep.

Hi, Henry here. I've been the draft rep for the last 2 years, it's been a rewarding and fun role. The role requires you to manage money, schedule and track tournament results. This means that you will also be developing those skills further whilst doing the job. Other responsibilities include updating the cube and managing the lands. My favourite part of the role is picking what sets to draft, as well as the weekly events help me improve my game strategy and test my luck. The role is relatively less time consuming than others, so if you enjoy the process of drafting and interacting with others, it is definitely for you! If you want to ask me anything or just chat feel free to message me on discord (hoph19#4181)

Heya! I’m Scarlett, your current CCGs rep, here to talk to you about the multiple wonders of being CCGs rep! Do you enjoy being a fricking nerd about CCGs to anyone and everyone who’ll listen? Do you enjoy watching a new player’s eyes light up as they discover what you love about your favourite games? Do you enjoy having just the 1 box that you need to get out the cupboard and organise week on week? Then do I have the position for you!

As CCGs rep, your main job week on week is simply to show up to the event and be a friendly face for people to talk to, as well as being the person primarily responsible for packdown and setup. Don’t feel pressured to have 100% attendance though, as there are many other CCGs loving members of the exec who’ll more than happily cover for you. Some additional things you do as the CCGs rep is acquire more materials for the society to lend during their events, organise as many fun tournaments as you want, and facilitate getting new players into awesome games.

Having been CCGs rep for the past year, I can say with certainty that it’s been a blast. It’s not a stressless job, for sure. But getting to nerd out about my favourite games, getting to see new players’ faces light up as they discover something they like for the first time, and looking at all the minor improvements I’ve made with a sense of achievement, makes every single one of those stresses worth it. So, I’d highly recommend running for CCGs rep.

We now have the latest version of the Handover Document done! If you're considering running for exec and want to bathe in the wisdom of past years, or are just curious about the runnings of the society, you can find it all in this "easy to read" 130 page pdf. I realise that sounds really intimidating, please don't read all of it, just jump to whatever bit you're looking for via the contents.

We've teamed up with Fantasy and Sci-Fi Soc and planned a trip to Escape Reality this Friday (the 18th) for a game of 'who will escape the fastest?' This'll be the first time we've done a collab with them but its sure to be a blast.

Escape Reality ((2nd Floor) East Entrance Broadgate House, Broadgate, Coventry CV1 1NG) have a great selection of rooms, and currently have a deal making it £16 per person on the two rooms we'll be doing as long as we can get more than 3 players for each room (Otherwise, it'll be £18.20 each). These rooms are Jungala and The Asylum.

The Rooms start at 18:00 for Jungala and 18:30 for The Asylum, and are both an hour long but to get in on time we're require to be there by 17:30. Anakin will be leaving from the university interchange at 17:05, taking the 12X to get there on time and you are welcome to join them.

With the threat of being Jumanji'd by an old board game, you must complete the game before time runs out.

Curiosity has you exploring a haunted Asylum when you find yourself trapped. Escape before whatever specter inside catches up to you!

Hope to see you there!

Several RPG events have gone up on the website for the past few weeks! Here's a quick summary and links to each one (with thanks to Lap for helping write it!):

A short second level adventure - The players are invited to attend a party commemorating recent archaeological discovery and the hostess' first year as lady of the oasis. Mysteries then ensue...

Microscope is a GM-less RPG where you work with others to form an epic history of your own creation. Explore your wildest ideas, whether they're intergalactic empires, small feudal politics or suburban schoolkids investigating the death of magic. Mock chronological order. Defy time and space. Build worlds and destroy them.

This is a community wide, text based, play by post campaign in a unique XianXia setting (Chinese high fantasy). Players are offered a large amount of options and flexibility to explore Asian mythology and history-inspired themes, stories, and settings. Players are not subjected to fixed regular play time so literally take it at your own pace whilst exploring this fantasy world.

This is a campaign set in the sci-fi world of DUNE, where the party develop the noble house their characters are in whilst exploring the futuristic planet-scape and advancing their goals. The organiser explicitly mentioned that they'd prefer experienced RPG players so as to not create a false image of RPGs to new-comers. 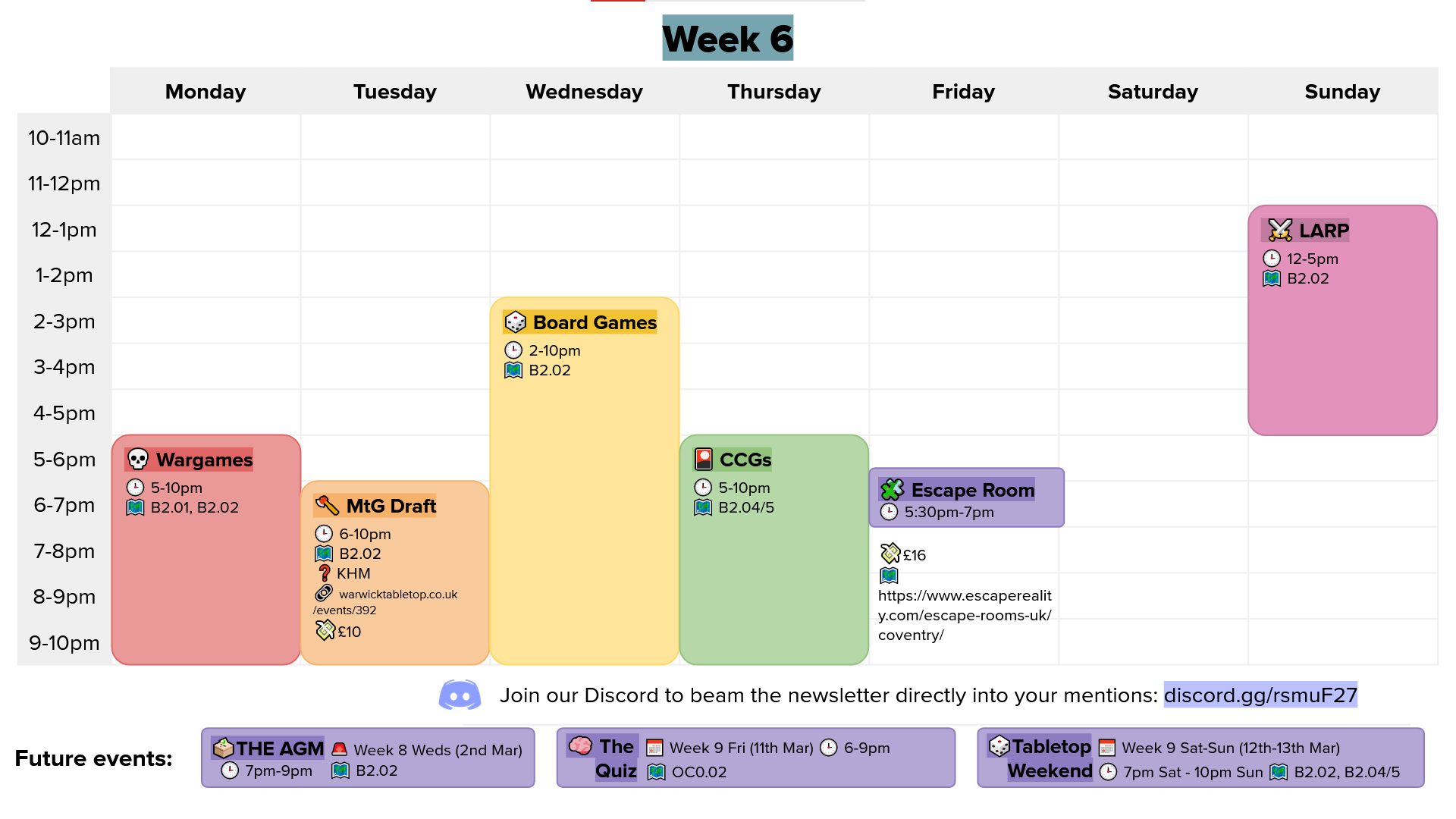 The Game Design game jam happened, with the theme of The Chinese New Year! Here's some games people made, including Chess 2, Fireworks, and several variations on the Zodiac. 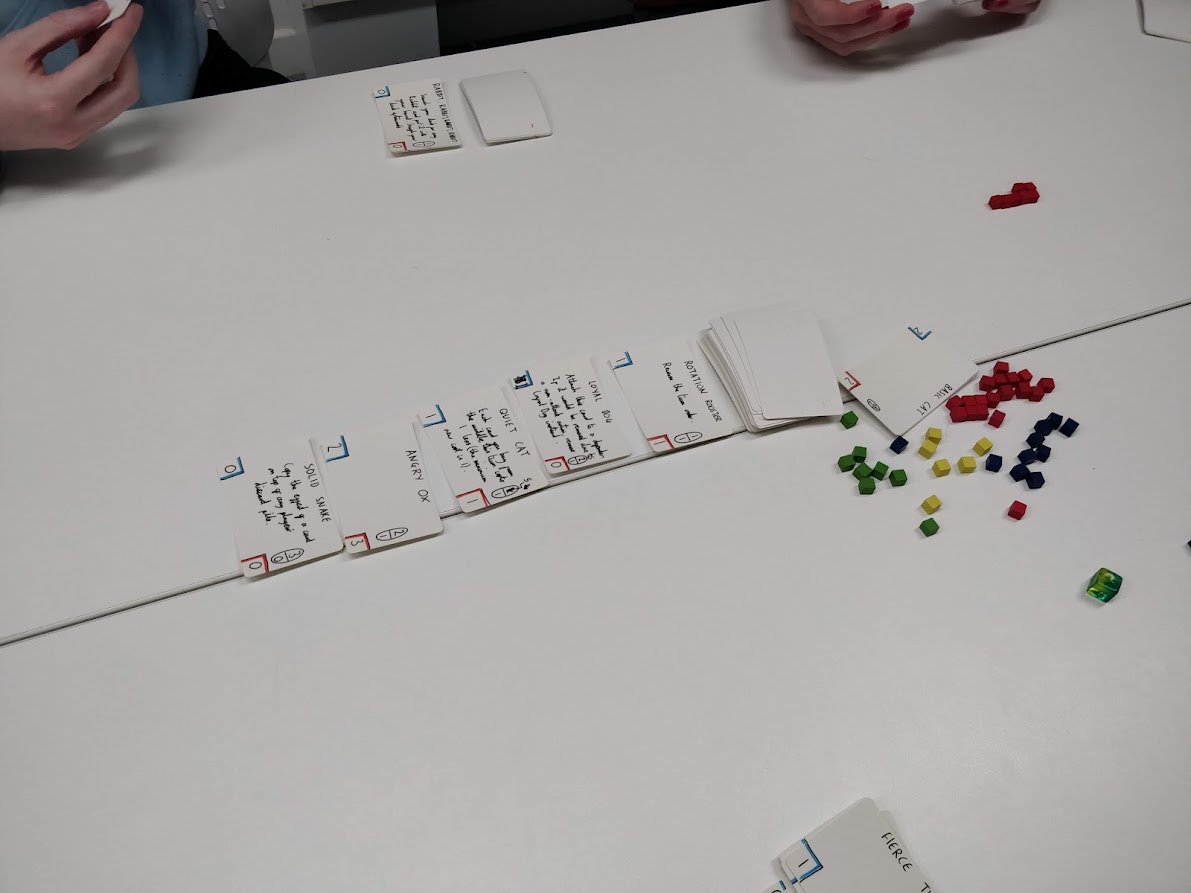 Dan made this Zodiac Deckbuilder, with the hero of the day Big Pig, the one card that could stand against the might of all the dragons and Knight Horses running around. There was also the most anti-spiteful card in any game ever (citation urgently needed) - Tit-for-tat Tiger, which does more damage if you attack someone who attacked you last turn. 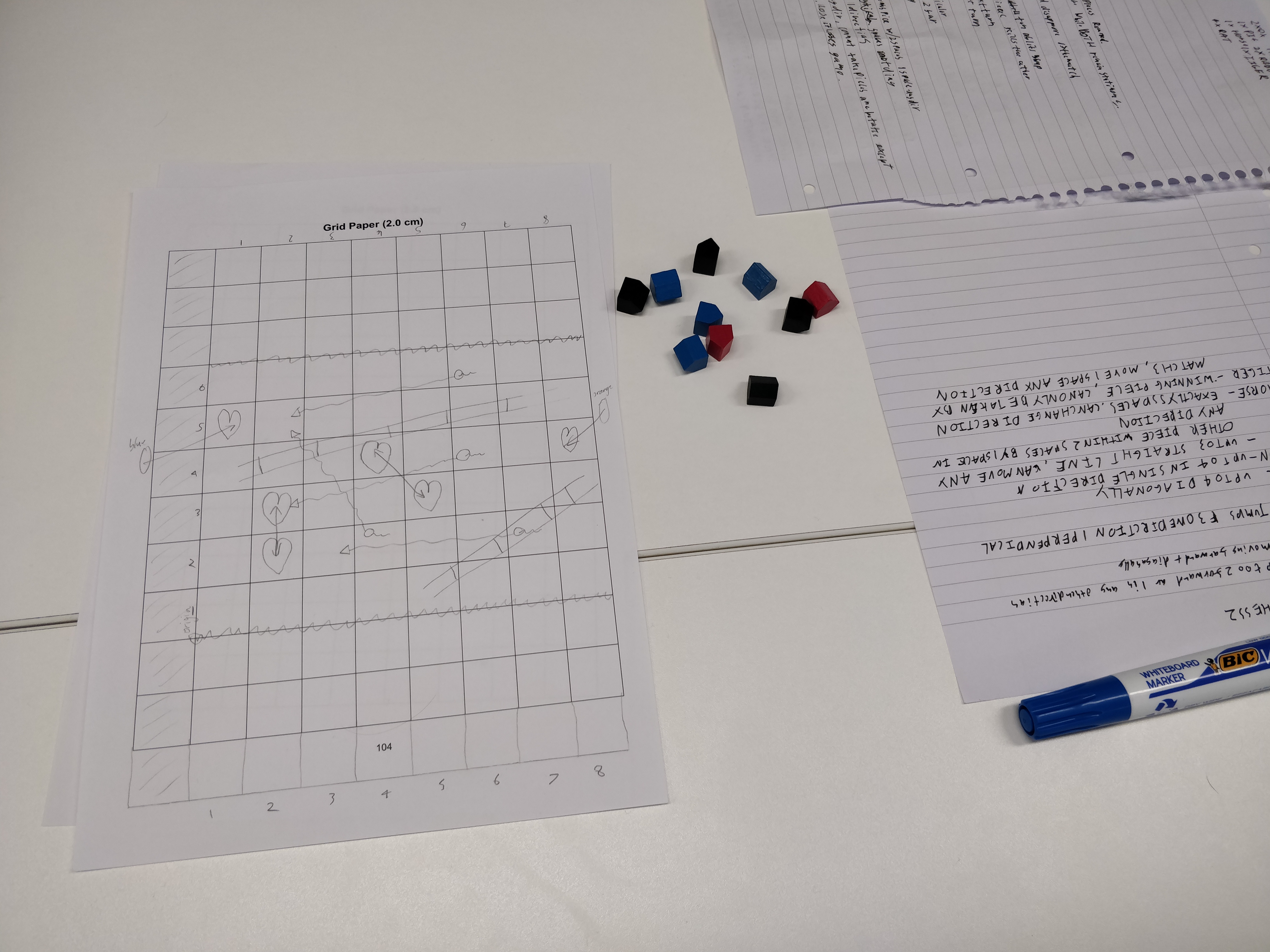 Will and Lewis took an old classic, a game that had stood the test of time, and proved that finally a new age has come for that historic board game we all know and and are aware of, Chess. Their improvements include:

I've only heard experience of playing it secondhand from Finnbar, but it's apparently genuinely really interesting. 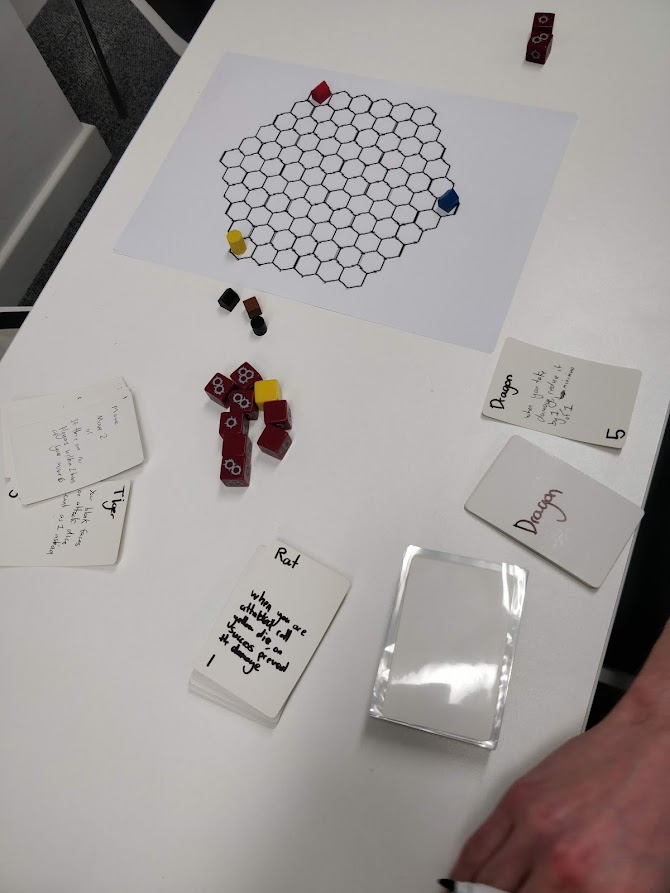 Joshuah made a load of good games, including a game about being animals of the Chinese Zodiac in a Battle Royale! 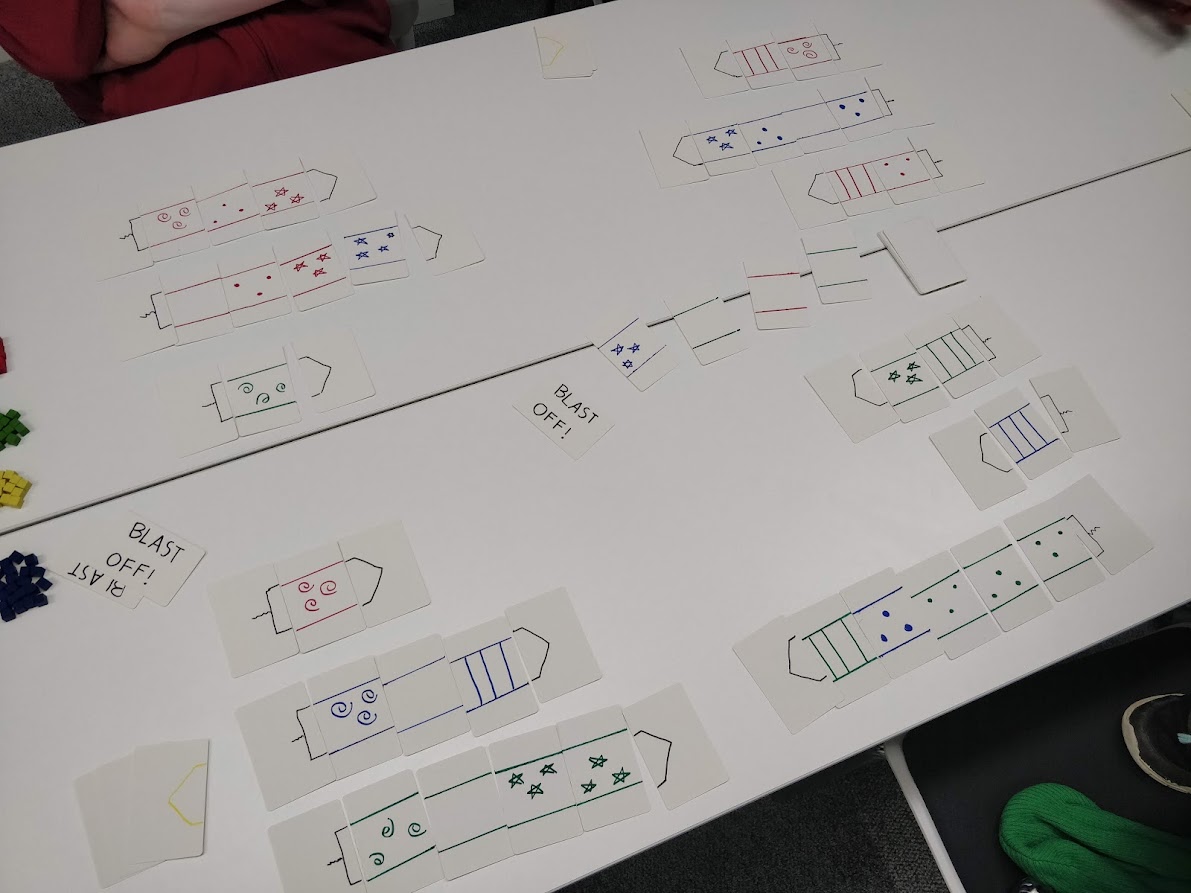 They also made Blast Off! It's a push your luck game about firework making which took about 5 seconds to learn and involved a lot of extremely comedic timing as people kept saying "there's no way this card will be a blast off" followed by it immediately being a blast off. 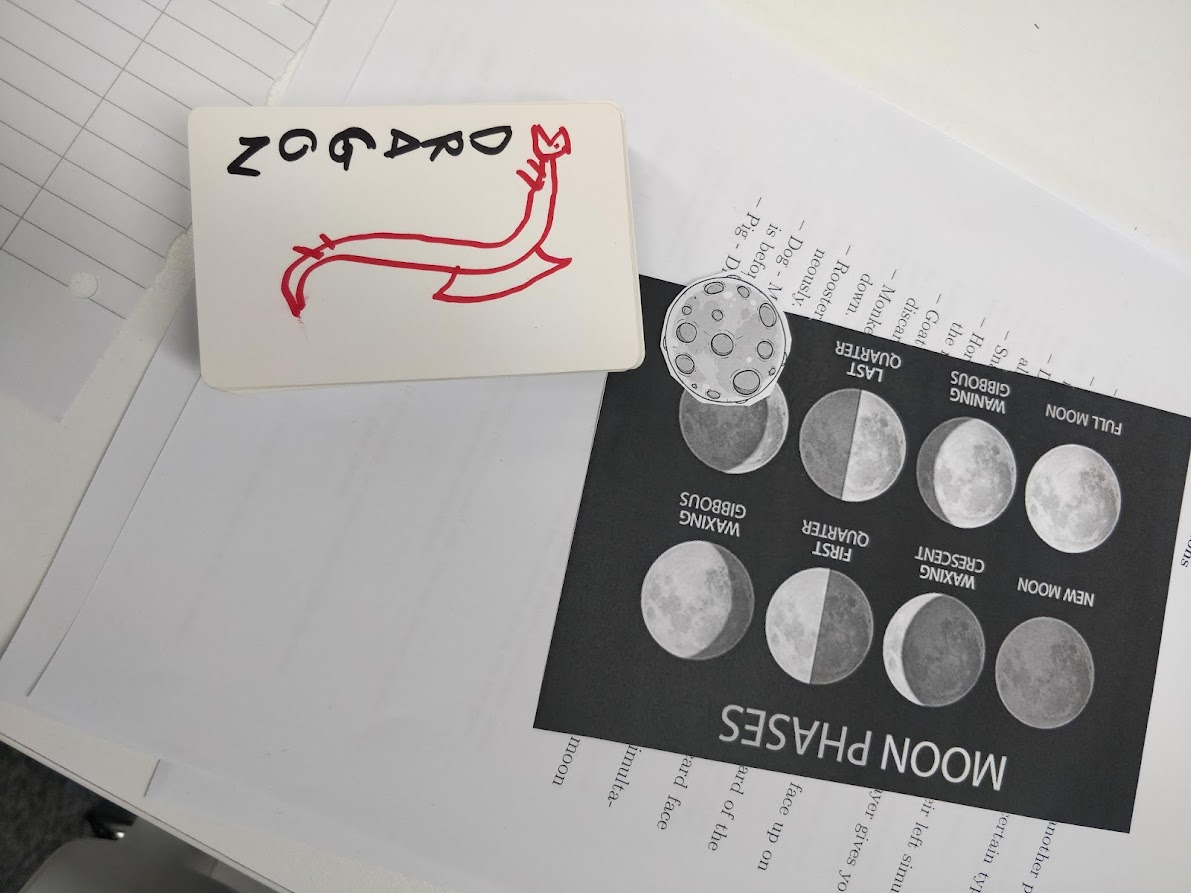 Finally, they made Ah, Rats! A game about bluffing, next level snake donation, and giving people rats because they assumed you were anything but perfectly honest with your card plays.

I made the dice give us secrets and rolled on what boring people might call an excessive amount of subtables so... There's one thing that's fundamental to life in the setting that people find unremarkable and also there's a simulation hypothesis sort of deal going on. I'm not sure if it's more interesting if everyone just knows they're in an alien simulation and doesn't care or if in this universe magic consists of telling stories so vivivd they pull people into them temporarily... Wait. I could use this as an excuse to pull in the Dixit elements I decided I'd do on a whim. My game design prowess knows several bounds but those are all problems for next week me rather than now me! (Come back next week to me trying to make these results into a coherent game or at least collection of ideas that could become a game without setting the newsletter on fire.)